The elusive herd bull. He’s in his prime. He’s calculated. He doesn’t want to fight but he wants all the cows. He’ll bugle then push his cows away from you.

He’s unpredictable. Not only are herd bulls mature and wise, they are usually the biggest bulls in the area.

Getting into bow range is hard enough, let alone getting a shot and punching your tag on a rutted up lady wrangler. Every once in a while a herd bull can act as dumb as a bag of rocks but still be almost impossible to kill. Getting past multiple eyes, ears and noses to harvest a herd bull may be the pinnacle of a mountain bowhunter’s career and has been something I’ve become obsessed with.
I’ve been schooled more times than I can count by herd bulls. I grew up bowhunting elk in northwest Montana and watched too many “How To” elk hunting DVDs and it looked easy! I had many failed attempts of blowing on cow calls and bugling at bulls on public land then driving home scratching my head trying to figure out why the bulls I was calling weren’t charging in, snot flying and nostrils flaring. It took me five years of hunting over-the-counter (OTC) areas with low densities of elk on public land to fine tune my approach on elk hunting. It’s been a long sweat-filled journey but has been worth every step and dollar spent. 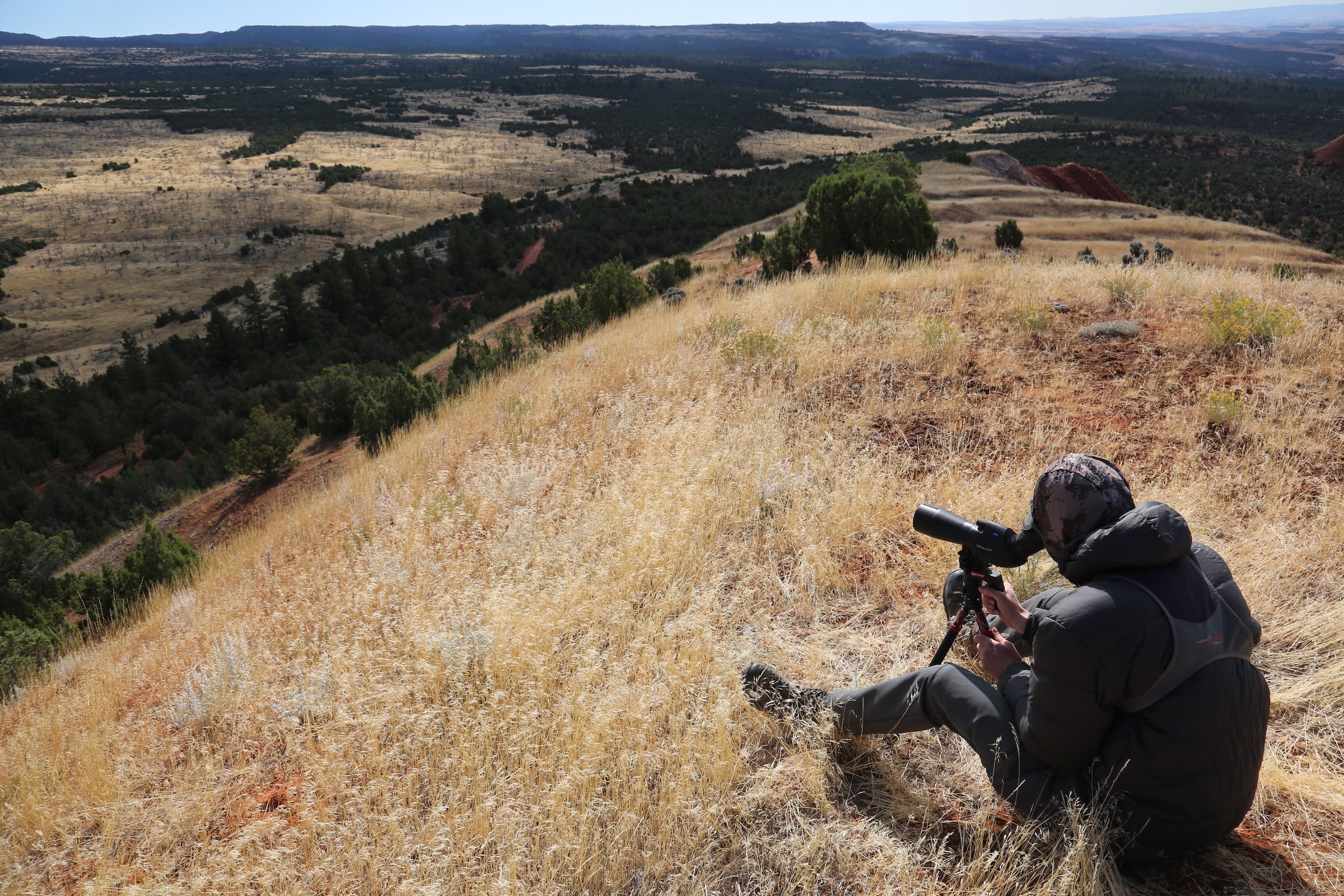 Stalking in on a herd bull is a great challenge and my favorite pursuit in bowhunting. Over the past several seasons I’ve refined my tactics for stalking mature herd bulls. First off, I prefer to hunt elk in open country. I define open country as more open space than cover, cover that elk can disappear in. I would much rather hunt elk in the wide open with good stalking terrain any day over playing cat and mouse in the timber. My success has increased substantially because of this specific change in tactic.

As elk evolve due to apex predators and as hunting pressure on public land increases, I have found that bugling during the rut has been more and more inconsistent or even non-existent in areas with wolves and grizzlies. Two approaches I have applied are to adapt to the evolved behavior and constantly in search of new places to hunt.

If possible, I stay away from hunting elk in the timber around the middle of the month. In general, I have found less bugling going on during the peak of hunting pressure in OTC areas.

If possible, I stay away from hunting elk in the timber around the middle of the month. In general, I have found less bugling going on during the peak of hunting pressure in OTC areas. And that tends to be the 15th – 20th. Do I sound crazy? Hear me out. I don’t mind hunting the timber when the bulls in my area are most consistently vocal, but the past few years have been pretty silent during these dates in my general areas. The thing I want to avoid is when bulls are silent and in heavy timber, finding them can be like looking for the proverbial needle in a haystack. This is the most frustrating time to hunt elk so once again, I tend to stay away from areas that are heavily timbered during the middle of the month.

Elk hunting in open country is more forgiving. If they aren’t talking you can bet you’ll still have stalks to make on bulls; again, anything to up your odds. My saying is, if I can see them I can kill them, even if they’re not talking. In addition, if you have some bad weather and colder temps, elk will spend more time in the open and even bed in the open, which is a game changer for the spot and stalk bowhunter. Hunting in the open country can be tricky at times because of the lack of cover, but as long as they aren’t in a flat ag field, there is always some topography to work with. Learn to use the terrain and calculate your moves carefully. One more thing to note is the wind in open country. It’s more stable and it moves with the topography more, making it ideal for bowhunting. 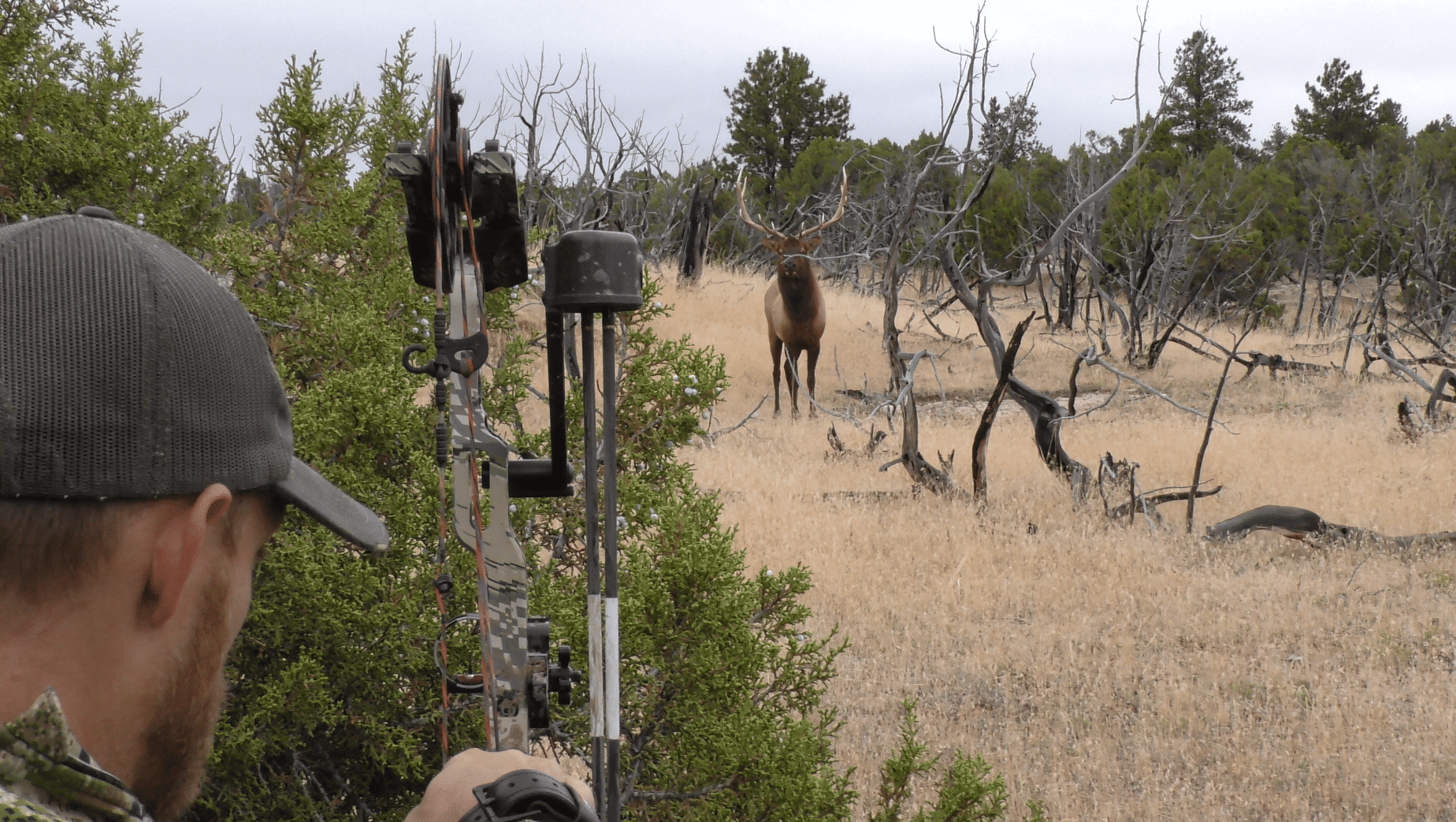 If the weather is warm, it’s going to be more challenging. It doesn’t matter if you’re hunting the timber or open country. Elk simply spend less time on their feet and in the open during daylight hours when it’s unseasonably warm. As always, open-country elk are most vulnerable when they’re up and moving, so your window is a lot smaller on hot days.

Once I locate a herd with a bull I want to kill, I observe their path of travel, get the wind in my favor and attempt to cut them off. If you can stay with them long enough, they will move into terrain where you can get close enough for a shot. Sometimes it may take several hours for a stalk to unfold. I think I’ve used the word patience in about every article I’ve ever written about bowhunting, so this is the time to apply that word once again. The stalk almost always turns into a waiting game for the herd to be in the right spot to get close enough for a shot. Be a lion ready to pounce on your prey when the time is right.

Calling in a Herd Bull

I never have had much luck calling in a herd bull with a bunch of cows. Over the years of trial and error however, I have found it is possible in the right situation. The most important variable to consider when calling at a bull with cows is to not call if you’re more than 75 yards away from him. A herd bull will move away from you every single time if you bugle at him from 200-400 yards. For the most part a bull won’t fight unless he really has to. It is essential to break into his comfort zone for calling techniques to work.

After that challenge bugle, you better have an arrow nocked and some shooting lanes figured because a dominant bull will almost always come over to defend his territory and cows.

The first task is locating a bull with a cow call. Using a bugle will put a call-shy public-land bull on edge so I shy away from it. If I can get him pinpointed I’ll work my way in on him with as little calling as possible. Once you break into his comfort zone of about 75 yards, act like you want to fight, make noise, rake trees and send out a challenge bugle. Match his vocalness then try and fire him up as much as possible. Cut him off with a bugle when he bugles. After that challenge bugle, you better have an arrow nocked and some shooting lanes figured because a dominant bull will almost always come over to defend his territory and cows. A lot of times it will be in a mad rush, eyes wide, and nostrils flaring.

This technique sounds great but a lot of factors have to be in your favor for it to play out resulting in a punched tag. The wind has to be perfect as well as the terrain and cover for this to work. The good part of hunting elk in timber is you can use natural barriers and thick cover to manipulate a bull’s path as he comes to fight you. That right there, skyrockets your odds of getting a shot when a bull comes in to check you out. But what if you don’t have terrain or cover once you have a herd bull located? You’ll have to wait on that bull to move into a place where you can sneak up on him and kill him. This is a situation that can’t be rushed and will only play out on his time. 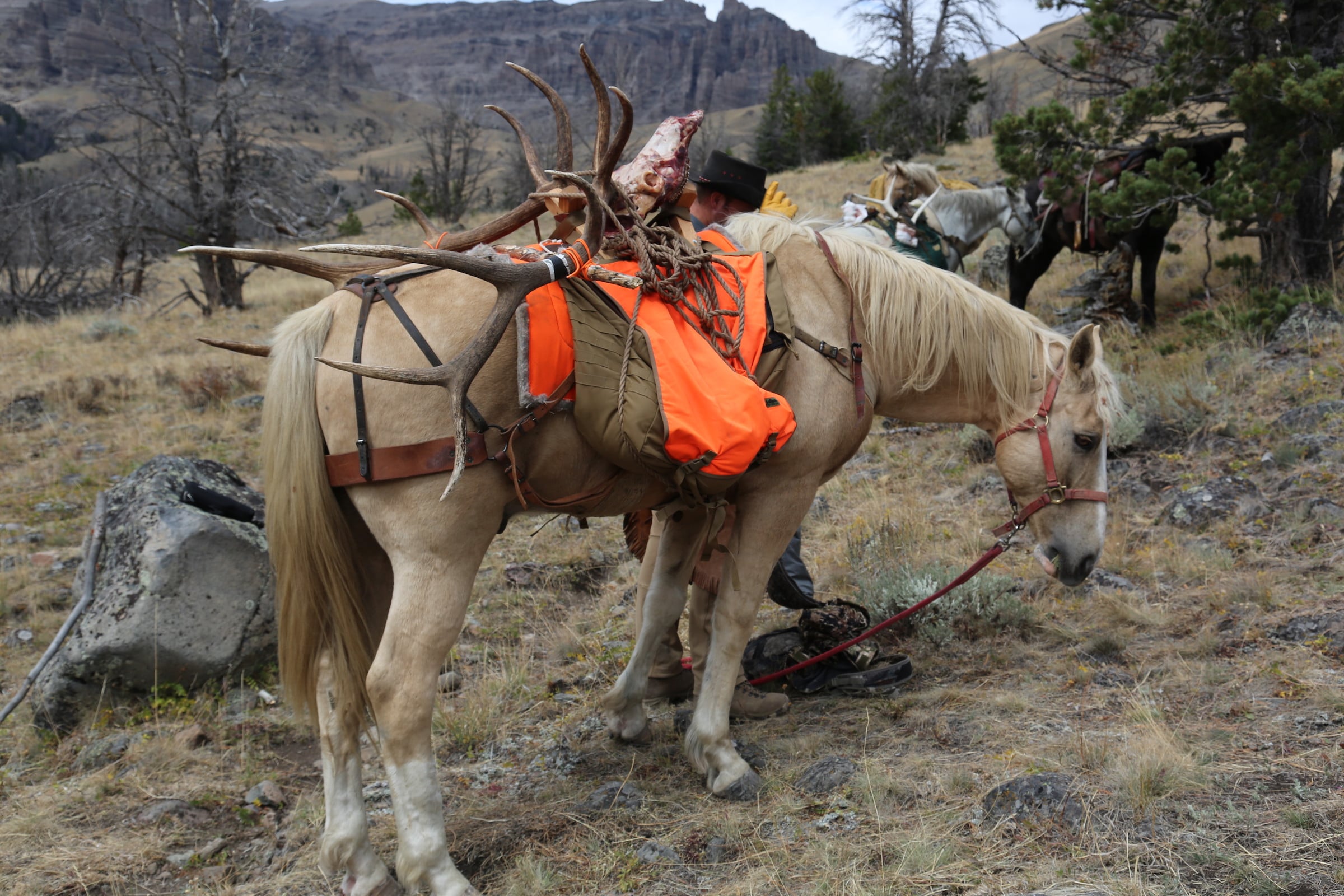 The lost calf call is a high-pitched short cow call with urgency that is repeated a few times. I’ll use this call if I get close to a herd in the timber and have some good natural barriers for calling to be effective. If I feel the herd bull is holding tight to his cows and is a little timid to bugles, I’ll use the lost calf call. This has been incredibly effective for me in the past. Usually I can to talking back and for with a cow when I use a lost calf call. I’ll get whiney and egg her on a little bit too. Usually they will come right in. Sometimes they will get so fired up they’ll come right in close under 20 yards and just stare at you. Their eyes say danger but their ears say a calf is in trouble. It’s quite a rush! If you can use this technique to lure in a hot cow, then odds are you’ll be at full draw on the herd bull shortly.

The dreaded bark. We’ve all heard it many times stalking into bow range of elk. It’s just part of the game. Once you hear that distinct bark from a cow or a bull, your stalk is all over. Or is it? If they catch your wind and you hear a bark, then yes, it’s over. This is called a warning bark. The one thing you can’t do is fool an elk’s nose.
Luckily, you can fool their eyes and ears. If a bull or cow elk see’s your movement but can’t decipher what it is, it may bark at you. This is called the nervous bark. If you have the wind, the gig isn’t up – yet.

A nervous bark means, who’s out there? Show yourself! This is where you can send a bark right back. You’re saying, “I’m alert too, show yourself!” This technique is best used in the timber with plenty of cover. Don’t expect this to work in the wide open staring face to face to an alerted elk. I’ve saved a few stalks where a cow has caught my movement and barked at me. I’ve replied with a bark to every bark I get from the suspicious sentry and it has calmed the herd down. If the herd is vocal, I’ll throw in a couple light assembly cow calls in the end. Be sure to practice your elk bark on your grunt tube before season, the results I’ve seen by adding the elk bark to my calling vocabulary are staggering. 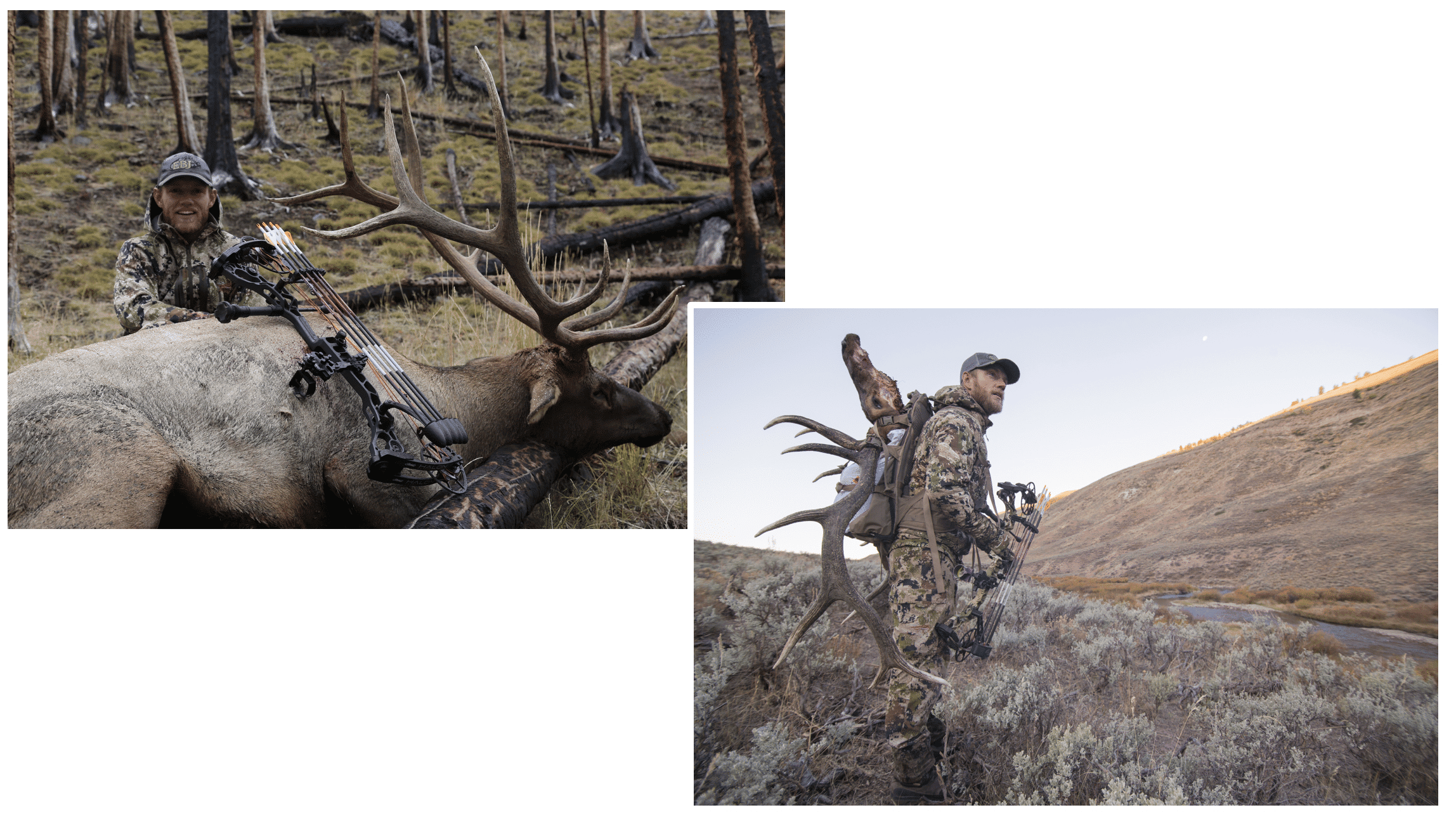 In my experience I have found that bulls bugle more consistently are where there are high densities of elk. High numbers of cows means more bulls. By default, there will be more bugling activity in getting the ranks figured out early in the season and throughout the rut which creates a vocal elk paradise, such as the Missouri Breaks in Montana. In contrast to northwest Montana where elk densities are lower: fewer cows means less competition and less bugling and fighting. A herd bull with 40 cows is a lot easier to keep tabs on with satellite bulls running around compared to a herd bull with 6 or 7 cows and maybe one or no satellite bulls around. Having Satellite bulls around will keep herd bulls more vocal and aggressive which makes the life of a bowhunter much easier.

“It was another great weekend for our team,” stated Mathews Pro Staff Manager Derek Phillips.

The Deer and the Dirt

Why your soil ecosystem matters.