How to Select Your Next Elk Hunt

With more and more people jumping into the application game, the unfortunate truth is that point creep is rearing its ugly head in most states and premium elk tags are taking a lifetime’s worth of points to draw. Generally speaking, hunters looking for the bull of a lifetime will be delegated to playing the points game; however, elk adventures don’t have to end there.

Many western states offer over the counter (OTC) opportunities that are available to every hunter, every year.

Sure, these generally won’t produce the biggest bulls, but savvy hunters are still putting down bulls above the 300” mark in these areas every year. Even better—these hunts will allow a hunter to continue to hone their skills until that tag of a lifetime is drawn. Really, OTC tags are the backbone of the beast that makes hunting in the United States so great.

For most, one of the hardest hurdles to overcome when researching OTC hunts will be state selection. With so many options, it can be difficult to initially narrow it down; however, with good research, it can be done.

When initially toying with the idea of an OTC hunt, I feel like a lot of hunters are discouraged and turn away because of the associated costs—often before they even sit down and run the numbers. While I’m not here to lie—out-of-state hunting can be expensive—it is important to realize that a smart plan of attack can take a distant dream and make it a reality quite easily.

On average, an OTC elk tag will cost between $500 and $700, which can seem quite a bit to pay upfront. Out of the six states currently offering OTC tags, the average cost is $626.04 annually. However, hunters only need to save $12.04 per week to hunt out-of-state every year! That’s two fancy cups of coffee or one lunch at a restaurant you need to cut out each week, which is something we could all probably benefit from. 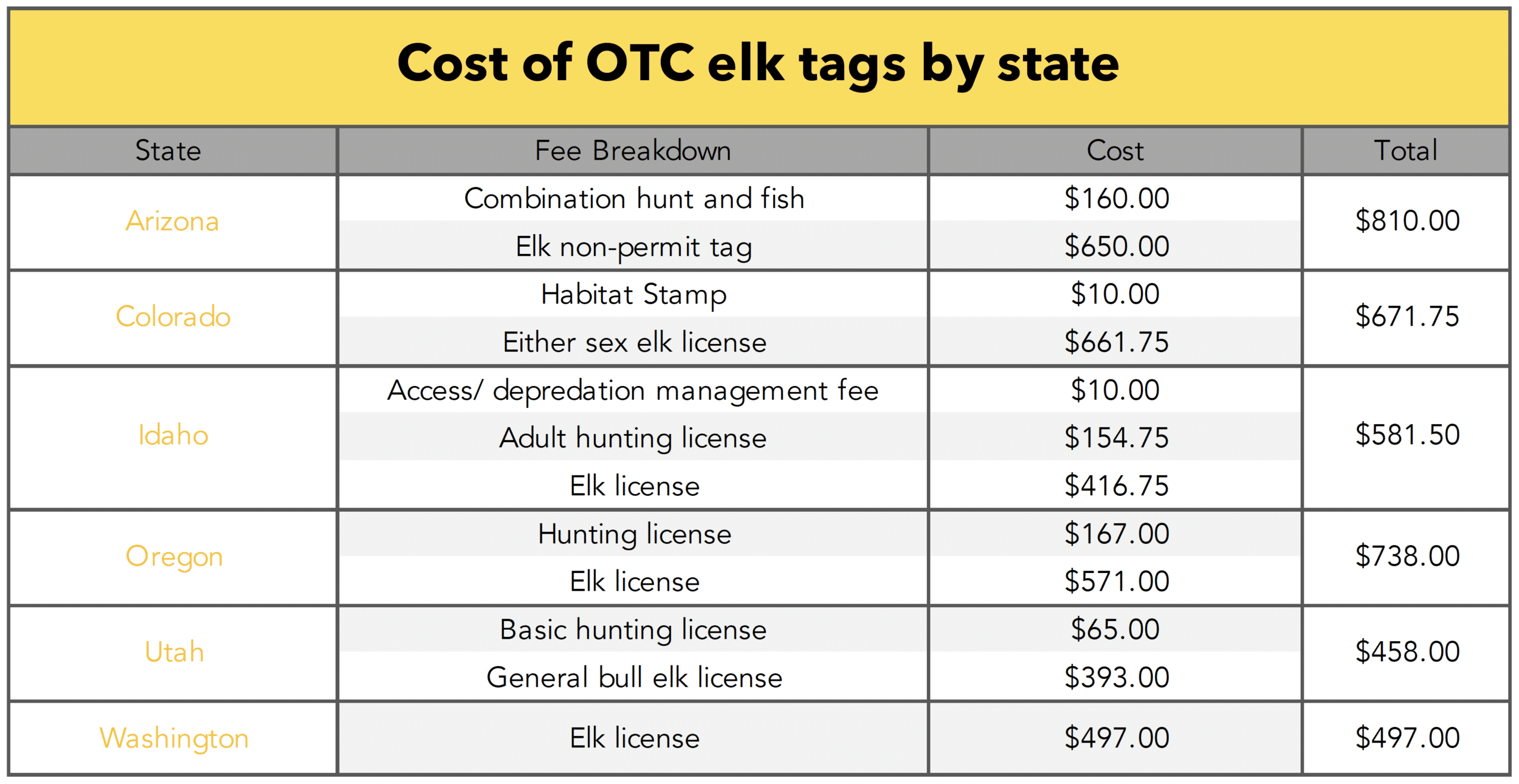 When analyzing the above table, it’s important to keep in mind that a few of these states may require additional fees before the season for special weapon stamps and other various fees although these generally amount to very little in the grand scheme of things.

When deciding on a state to hunt it is important to take a few key factors into consideration. Because of the wide diversity of OTC hunts available, anyone should be able to find a hunt that can provide exactly what they’re after. One great thing to keep in mind is overall elk population from state-to-state. While this can be a great indicator of how many elk a particular state holds, it can also sometimes be a direct correlation to pressure from other hunters.

Another great source of information to carefully study will be historical Boone & Crockett (B&C) entry trends. While most trophy animals are found in limited-entry units, many great bulls are taken on OTC hunts every year and knowing where the highest concentrations of trophy bulls are found can lead to hidden gem areas. 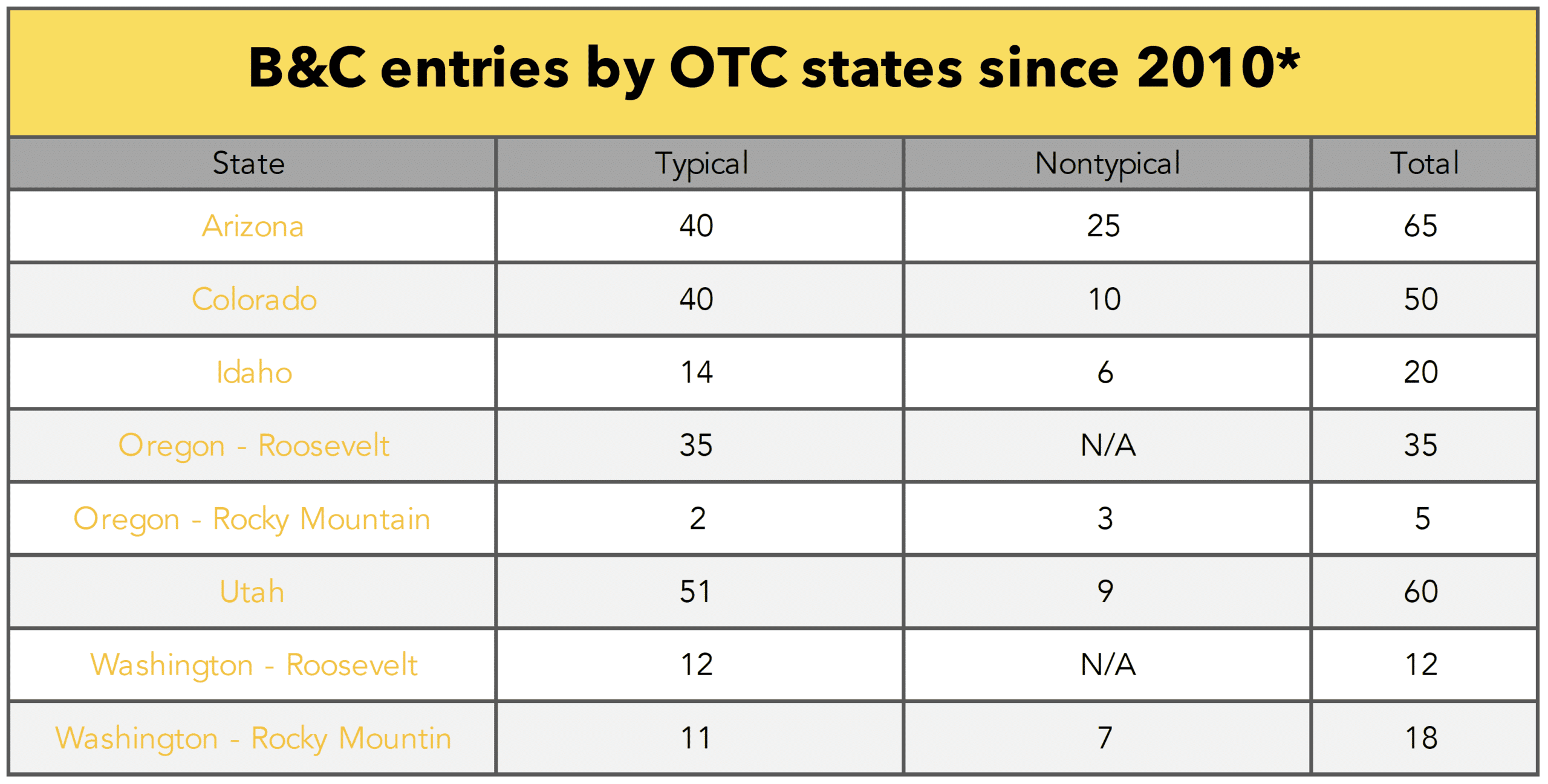 With enough research, nearly every state on our list can provide a fun and enjoyable hunt and be within the budget of anyone willing to save. Obviously, Arizona is going to be generally avoided by most, but some decent bulls are killed there every year. Colorado and Idaho undeniably provide the most options for OTC hunters and should be at the top of the list for anyone looking to experience elk hunting year after year. Following closely, Oregon has some decent opportunity for Rocky Mountain elk along with great opportunities for Roosevelt elk. Washington can also provide some good opportunities for Roosevelt elk although these tend to be smaller than those found in Oregon. Lastly, Utah can be a tougher hunt with an OTC tag, but with its extremely low tag cost, it isn’t a bad place to look at; familiarity with units can lead to great success rates here.

To learn more about elk hunting opportunities and detailed data to help in your future hunts, visit GoHunt.com and check out their Insider program.

6 Reasons to Take a Shedcation

Here are 6 Reasons to Take a Shedcation!