Opportunities to learn about elk and the places they live are endless, but with our busy lives it can often be hard to scout and invest the time we want. However, with the use of trail cameras, you can expedite that learning process and let the cameras scout when you don’t have time.

I’ve been using trail cameras for years to learn about elk, the quality of game animals in certain areas and their movement patterns. The information gleaned transfers over well to fall hunting season, it’s also just fun to get an inside look at what happens in the forest.

This was the most mature bull I saw last summer. I was thrilled to capture the footage, but due to my work schedule I wouldn’t be able to hunt the area for opening weekend of bow season which is when the bulls are there. After opener, the rut kicks in and they all leave to find cows. I’ve never been able to figure out their movement pattern, until this year.

Fast forward a few months to mid-September. I was bow hunting elk 8 miles away from where I’d gotten the trail camera footage. I was chasing bugles. My elk hunting tactic is to dog a bugling herd bull, follow him and his cows as they move through the forest, then with the wind right, I’ll try to get ahead of them and cut him off. I don’t cow call or bugle. I let the elk do the talking and play the wind. This is a high risk, high reward tactic, but it’s the best way I’ve found to effectively hunt a herd bull in rut.

On the morning of September 16th, I was dogging a bull. His raspy bugle, which was echoed by the squirrelly sounds of satellite bulls, suggested he was a herd bull. The bull was heading straight north up a draw and moving quite quickly. I got in the draw next to him and paralleled him as he moved up. Eventually the wind started to blow from him to me and that’s when I made my move. I sprinted up my draw a quarter mile, then ran up and over into the edge of his draw. With an arrow nocked I stood in front of a tree to breakup my outline and waited. 20 cows walked past me, unaware of my presence. The bull neared. 70, 60, 50, 40 yards. Then he got out of the coulee and walked across to the other side just out of range. He then trotted along the other side trying to catch up to his cows and was gone, so I thought. As I got ready to move and loop around for a second chance, I glanced up and saw the faint outline of his antlers. We was walking down the coulee and coming right towards me. All his cows were ahead of him, I had no idea was he was doubling back. I stood motionless and ready.

Previous bowhunting mistakes taught me a few things when you’re in tight on elk. 1) pre-range objects as elk are almost always on the move and you rarely get enough time to range the actual animal, and 2) draw your bow when their head goes behind an object so they don’t see you draw.

My heart was pounding but I was feeling confident.

I had pre-ranged some trees and due to the thick forest, any shot I might get would be under 30 yards. As the bull’s head passed behind a bush at 30 yards, I drew.  I noticed something funky going on with his antlers, but to avoid getting antler shock I focused on my shooting lanes.

At 23 yards he stopped perfectly broadside in a shooting lane. Everything was lining up perfectly! The next part is a bit of a blur.

As a hunter you spend countless hours, days and even years to get to a moment like this. All the stress, anticipation, preparation, highs and lows, and thoughts of success all collide at this point. I love this part and hope that bow hunting will always make my heart skip a beat, but, in this instance, in my overload of emotions, I punched the trigger badly and messed up a 23 yard shot about as bad as I could.

I do everything I can to make a good, ethical shot. At 23 yards I felt confident in my abilities. As my arrow accelerated off the string and before it even left the rest, I was wishing I could somehow run out ahead to re-direct it’s trajectory. I punched the trigger on my thumb release. In fact, target panic had set in so badly that when it was time to release the arrow, my thumb, which had remained behind the trigger, wildly swung around and smashed the trigger. I had focused so hard on getting close and not repeating past mistakes that I failed to focus on the most important thing which is engraining a shot sequence and process into my head. 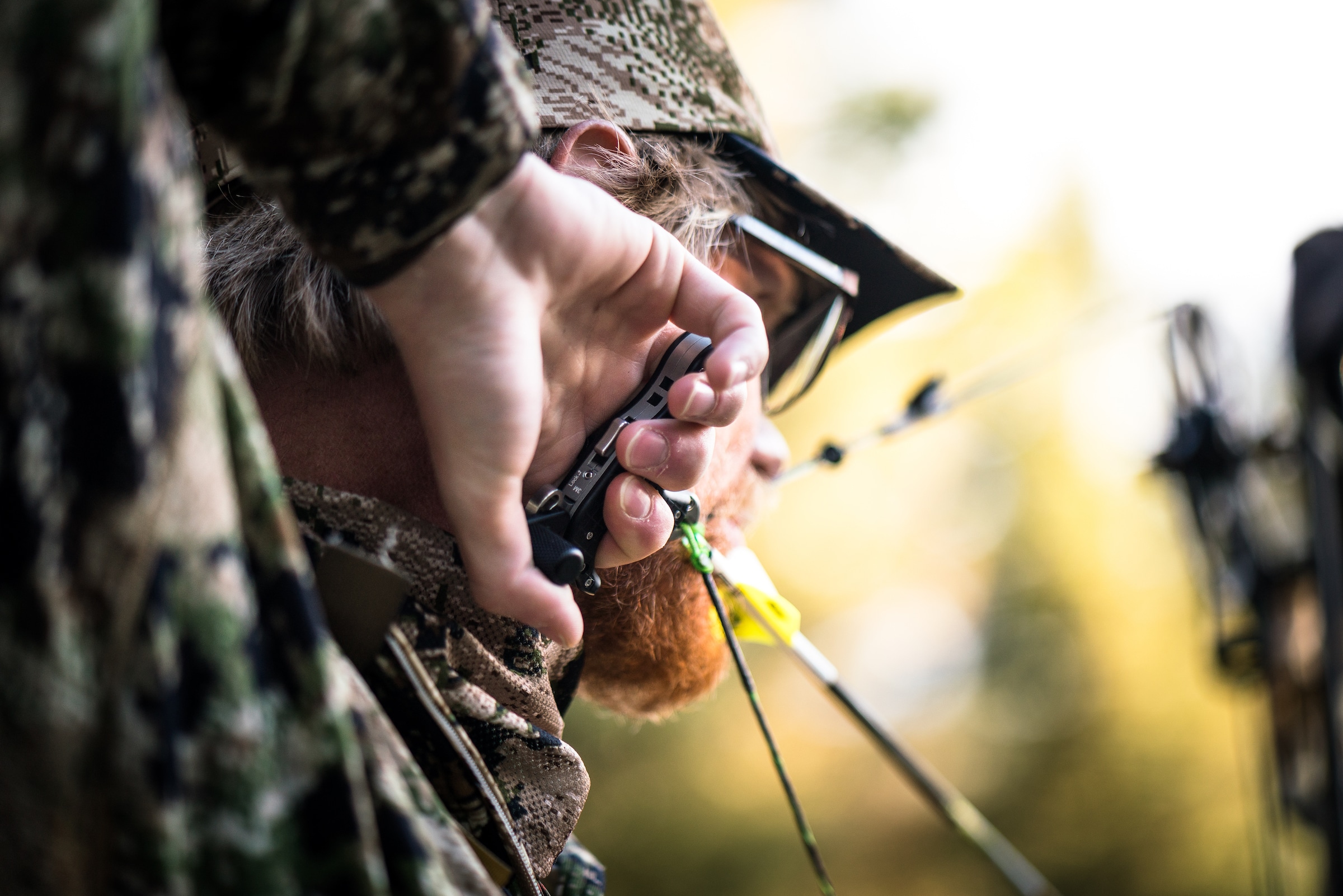 My arrow impacted high and back, about 3 feet left of where I was aiming. I was so disappointed in myself and felt terribly for the bull. The arrow passed through, and to my surprise, the bull ran 100 yards and laid down. I was pinned, there was no opportunity for a follow up shot, the wind had switched now and he could smell me and was fixated on my location. I didn’t move and was praying that he might expire right there. After an hour he stood up and slowly walked off.

The shot appeared to somehow be lethal. I backed out, called my Dad who has helped on numerous elk recoveries. We met up and decided to wait 8 hours before going back in to look. In years past, we’ve blood trailed animals too early and have learned that when the shot isn’t ideal, you need to wait, or you’ll run a high risk of bumping the animal before it has expired.

8 hours later we had our eyes to the ground and nose in the air. There was a small, pie plate blood spot where I watched him bed. Other than that, there was no blood, just a sea of possibilities on where he may have gone. We knew the area well and from past experiences we knew that wounded elk typically go to the thickest cover they can find. Instead of grid searching, we started searching higher-probability areas. There were two areas that were thick with new-growth timber. That’s where we started, spacing ourselves 15 yards apart and making passes through. As we bush whacked our way through the first patch I got a whiff of elk. It was musky like a bull, but had a slightly different odor. I followed my nose and found an elk bed with blood, then I looked up and saw antlers. The bull was expired 20 yards away, and judging by his body temp he hadn’t been dead for very long. 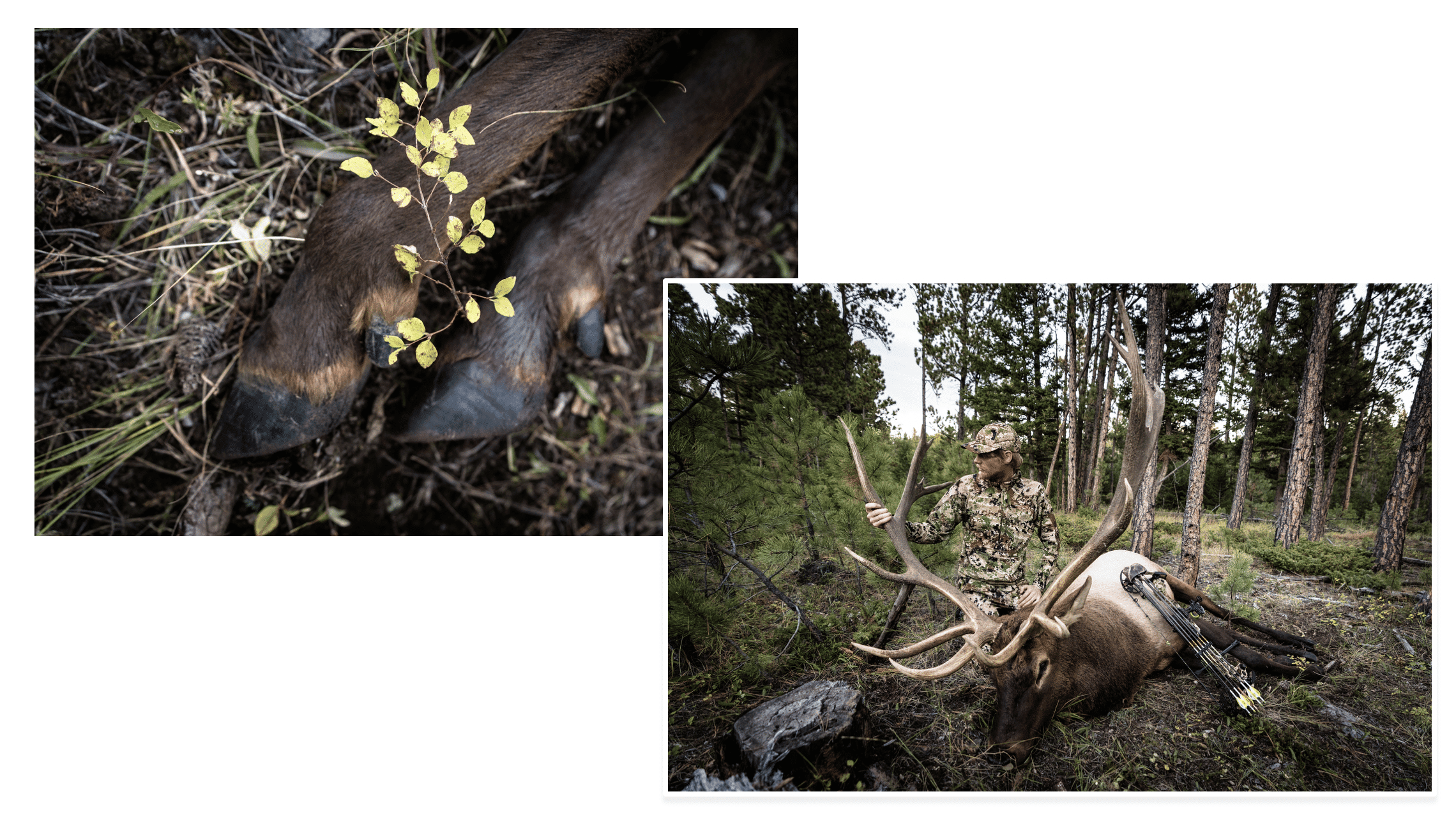 It was a sobering moment. I was upset with myself for losing control on the shot and putting the elk through pain. I was thankful that my Dad and I were able to utilize past wisdom to recover him and not lose an ounce of meat. What a relief! Upon further inspection, my broad head nicked an artery that came down from the bulls spine and into his hind leg. 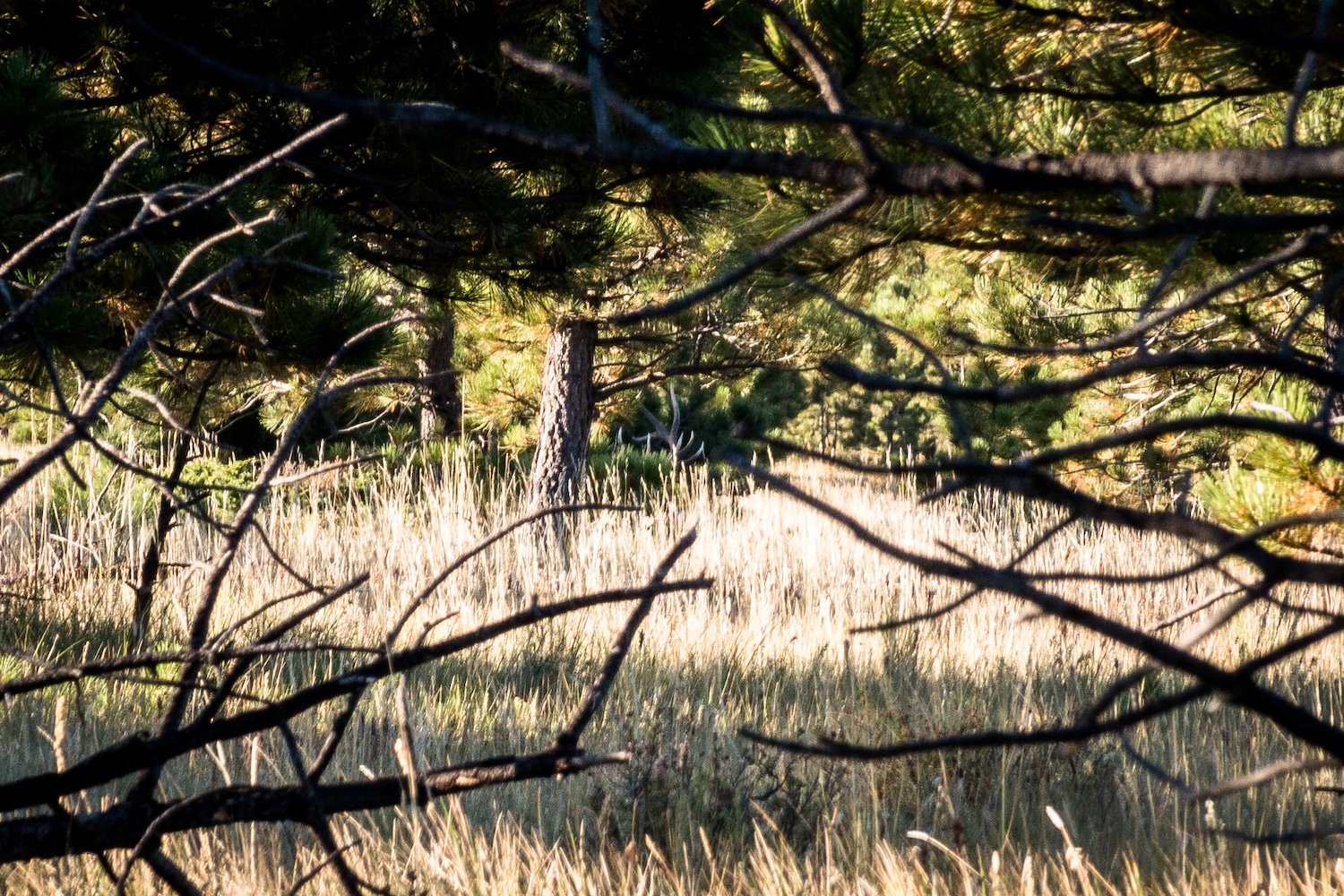 A month later, I was watching old trail camera footage I’d captured during the summer. My jaw dropped when I realized the bull I had killed was the same one I’d got hissing on camera high up in the mountains. His summering ground was over 8 miles away from where he was rutting and where I arrowed him. My mind raced with this new discovery. I just connected so many dots on their movement pattern.

My trail camera findings combined with lessons on elk recovery, when to draw my bow, pre-ranging and establishing a shot process made this the most informative and wisdom gaining archery season I’ve ever had. I’m grateful for how the hunt played out and hope that my experiences might help others to have a better hunt.

Trail Kreitzer’s top tips on how to capitalize on elk wallows during the early season.

The Deer and the Dirt

Why your soil ecosystem matters.