With a myriad of statements like, “Sheds are dropping soon!”, the explosion of shed hunting hype begins earlier each season. Try taking some time to check out some late December and early January social media postings. From articles, to videos to Instagram posts from your favorite hunting folks, it would seem that mega bucks are shedding their antlers at a record pace every single year.

Each year shed timing is earlier and the ever-increasing annual craze to hit the woods does not appear to be slowing down any time soon. However, should your annual shed hunting adventures parallel the timing of the social media hysteria? Probably not. Like most things in life, patience is key. From small parcels to big woods to public land and all regions in-between, here is a look into various shed antler timing tips that you can apply to your own hunting grounds.

It is critical on small parcels that you learn to evaluate exactly when peak shed drop timing takes place. Whitetails often spook at least a ¼ mile when spooked, and during the winter months when lower levels of quality cover is available, they often spook a ½ mile or more. Even on parcel sizes of 200-500 acres, it is very easy to spook deer off of an entire chunk of hunting ground, and when it comes to mature bucks they typically won’t make it back for a few weeks or longer, if at all. After assessing the peak of shed drop for your small parcel, I encourage you to begin searching for sheds on the backside of the peak. In many locations the perfect time to wait to shed hunt on small, Midwest agricultural parcels is during late February or early March. 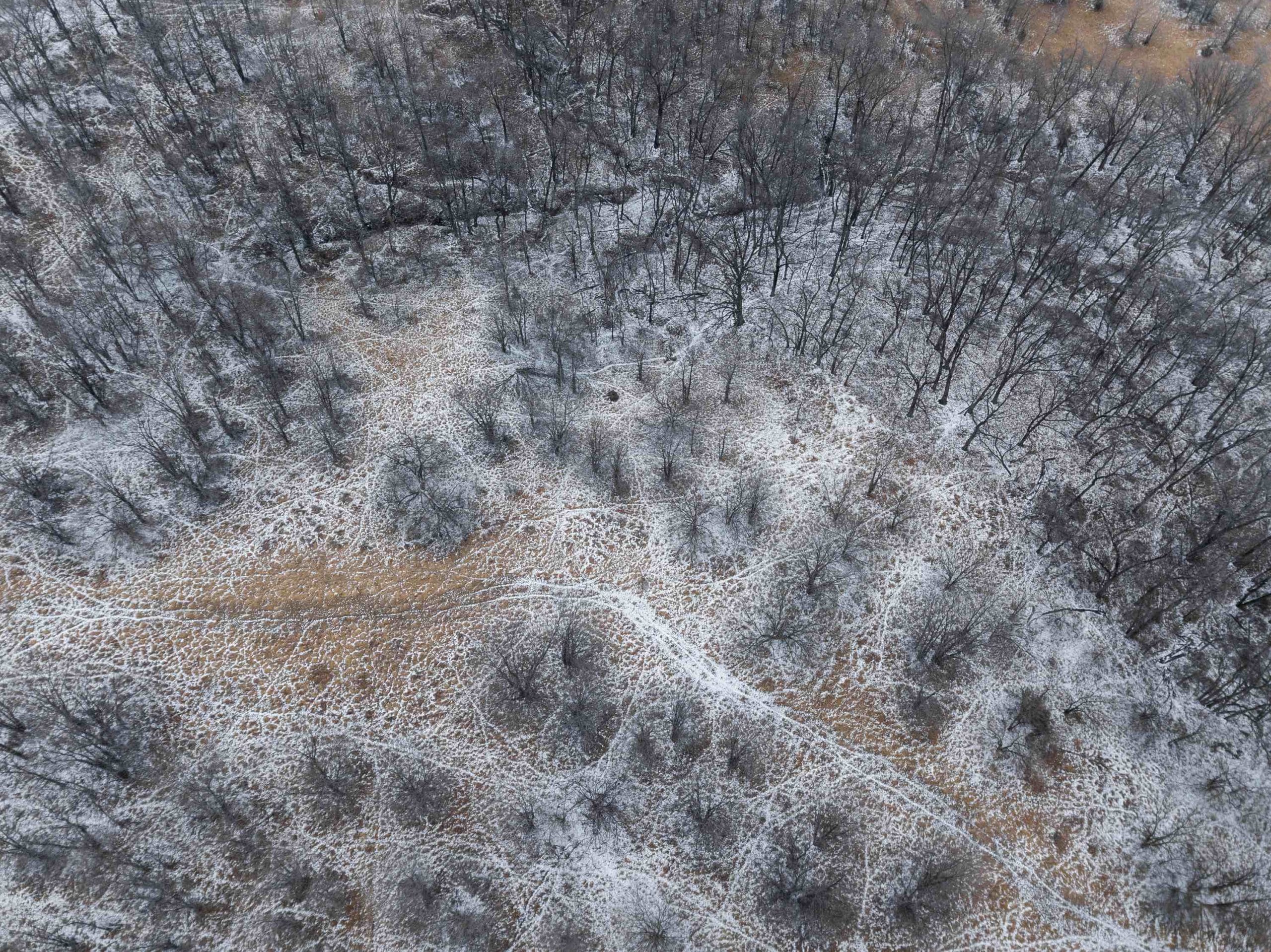 “Shed hunt early and every chance you get”, I recently read on a hunting social media post. Although I have experienced that this is bad advice for small parcels, this statement is perfect for owners of large parcels of private land or for those that love to scour the giant haunts of public land. The risk of any shed hunting timing is not only wasting resources from whitetails that live or die by the level of their energy reserves, but the fact that you can push deer into locations that you do not have permission to search for sheds. When parcel sizes exceed 1000 acres or more you can make sure to stay on top of antlers that may be shedding by the day. Also, even though you may spook deer a ¼ mile or more with each intrusion, the size of the parcel may still encompass any whitetails that relocate. Big chunks of shed hunting ground have some advantages and can often tolerate lower levels of shed hunting patience. Hunting early and often for sheds on mega parcels can be a great tactic provided you are not intruding on winter habitat that is critical for whitetails located in high winter severity regions. 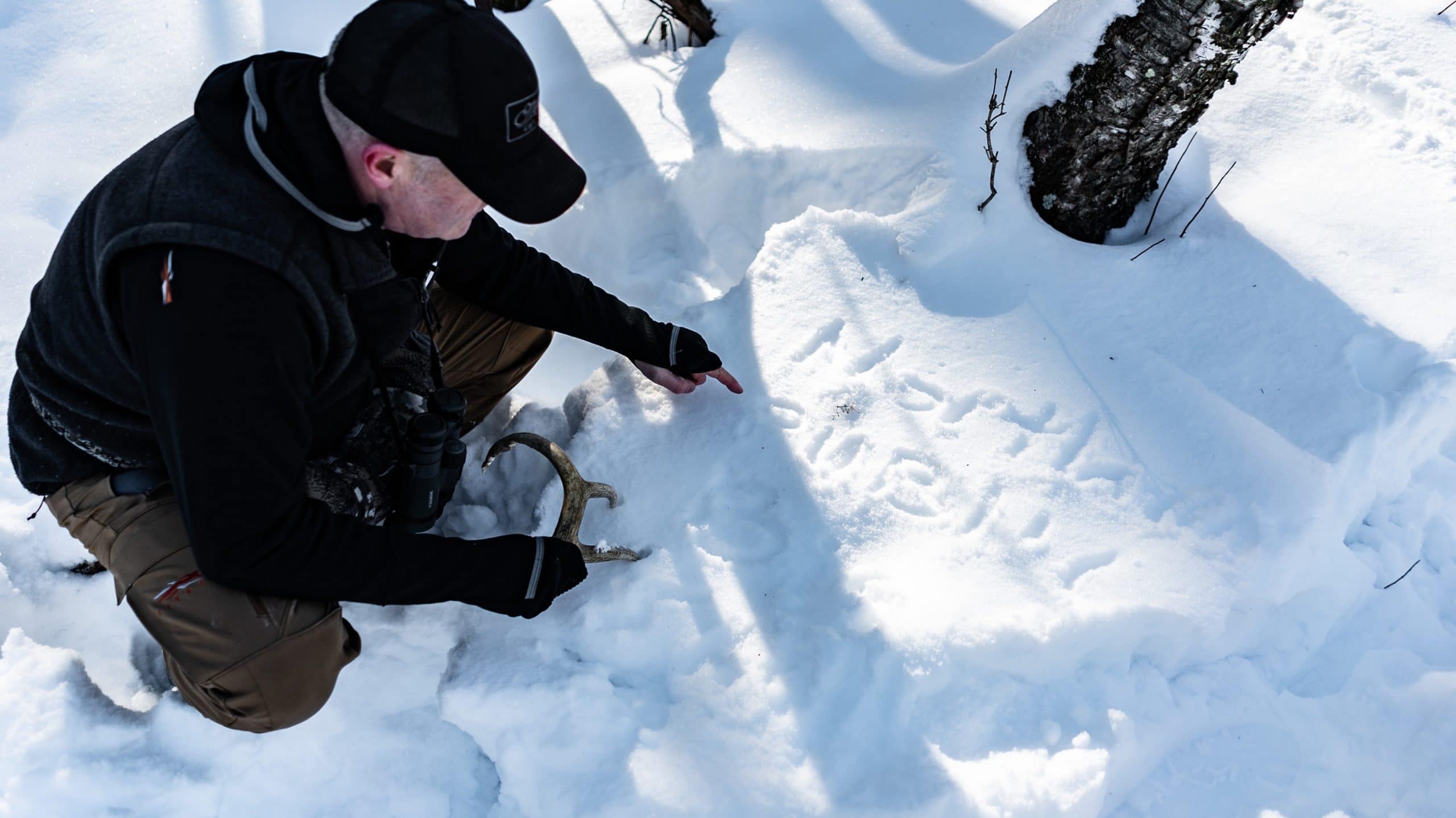 With Minnesota snowmobile trails being re-routed to avoid disturbing deer, and various Western states restricting public lands from shed hunting until the critical periods of winter stress have passed, it is important to estimate your effect on the local deer herd when hitting the woods for your first shed hunts of the year. The larger a whitetail is, the larger the tank of energy that they enter the winter with. While mature bucks and does have proven nearly impossible to kill with winter severity, regions like the Upper Peninsula of Michigan lose 50% of their fawn crop during an average winter. When disturbed, whitetails waste energy to flee. Whether by man, machine, or predator, deer in many northern regions cannot afford to lose days of energy reserves that may have otherwise kept them alive. Although antlers often drop by mid-January in these regions, I have often found that waiting until the snow melts in late March and early April is a much better option than rushing into wintering habitat to take on the difficult task of searching for snow-packed antlers. 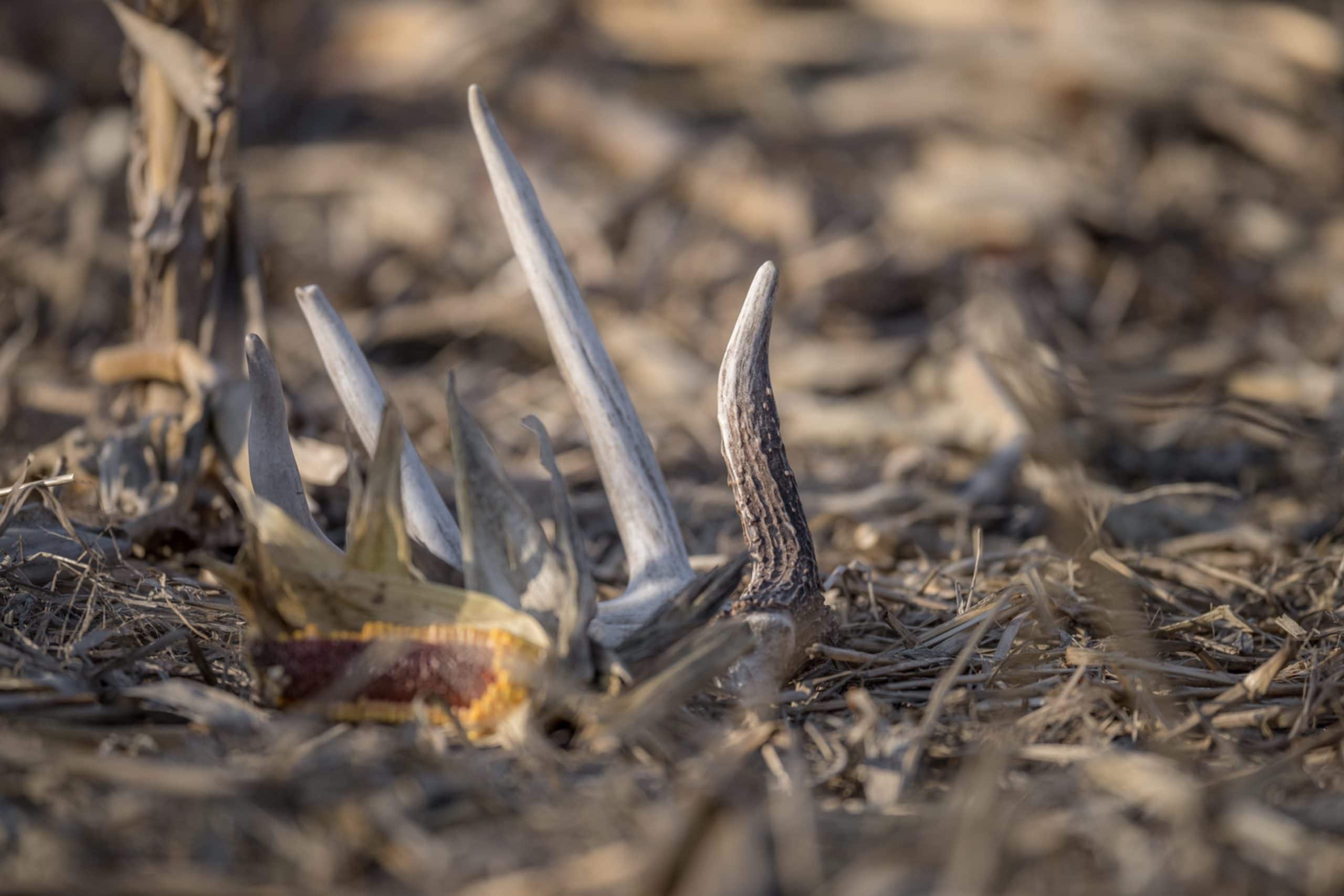 As a general rule, as early winter severity levels are decreased and the levels of overall food supplies and habitat levels increase, the timing of shed drop will become much more varied and later into early Spring. It isn’t uncommon for a small percentage of bucks located in most Midwestern agricultural regions, to hold their antlers into April.

If you have allowed the local deer herd to settle into a favorite Wintering area, then your shed hunts could be very short and sweet! Unpressured Wintering whitetails tend to stay in their preferred Winter habitats until pushed away or Spring takes place. Don’t be dismayed, because Winter habitat is typically not located within the same acres where preferred Fall habitat is located. To help you narrow your efforts into the best shed habitat locations, here is a quick run-down of my 5 favorite locations to find a shed:

Often, folks spend a large percentage of their time searching for sheds in low probability acres. If the local deer herd has been unpressured, I find that at least 80% of shed antlers can be found in a small percentage of winter habitat including winter food sources, winter bedding areas, brushy travel corridors between food and bedding as well as various daily crossings of ditches, creeks and fences.

The best advice that I can offer is that there is only one perfect shed timing strategy that can be applied to everywhere that a whitetail roams – Patience! After assessing the perfect shed drop timing based on your particular location, it pays to exercise a little patience before hitting the woods. Even on large parcels of public or private land, it pays to make an educated guess for exactly when shed drop truly begins – and then hit the woods. While the annual shed hype is real, the ever-increasing myth of early shed drop is not. After allowing a shed location to heat up with unpressured winter whitetail habitat, it can be shocking how many sheds can be found from the entire local buck herd in just one tiny location. Good Luck!

Click here to watch a video on this topic and explore a myriad of other whitetail strategies on Whitetail Habitat Solutions Youtube channel.

So many things to do to get ready for the season… are you focusing on the RIGHT ones?