“One of the biggest benefits of hunting a wallow is that it puts you in control. You get to pick the location you want to set up in and you know the yardage to your intended target” – Trail Kreitzer

With many states kicking off their archery hunt in early September, the opening day of another new elk season is finally here. One of the most common questions that we get about archery elk hunting is, “When is the best time to hunt?” It’s a valid question. Everyone dreams of a rut-crazed bull crashing through the timber toward your calls and if you want to hunt the rut then there are definitely dates that are better than others. Generally, Sept. 15 to 25 are going to be the best days to hunt rutting bulls throughout the West. For obvious reasons, those dates are also going to be higher in hunting pressure within most elk units. This raises another question: with most states opening the first week of September, can I hunt early—before most of the hunting pressure—and still find success? I think you can and I’m going to cover one early-season method that can be very productive, which is finding and hunting an elk wallow. 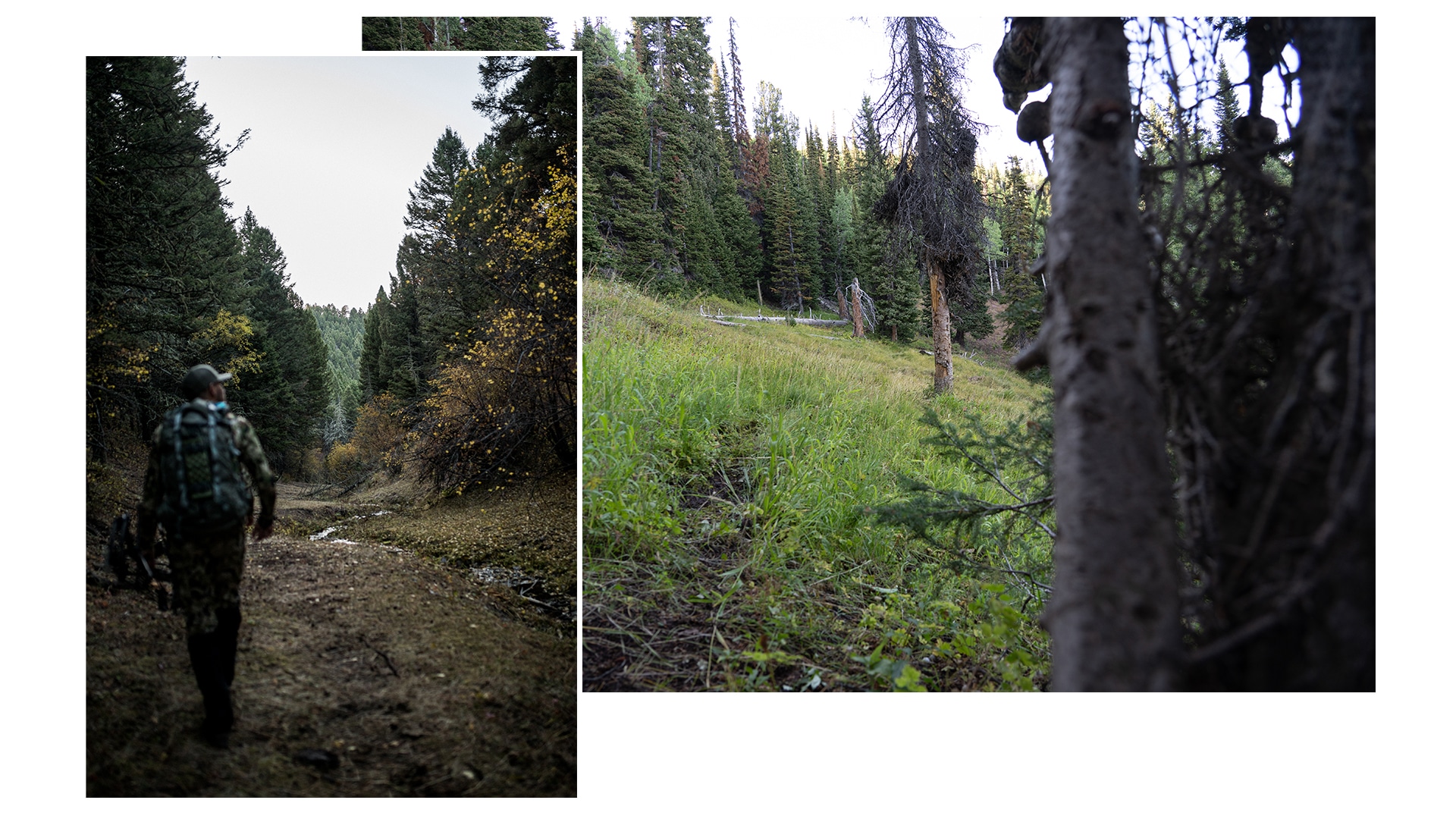 Simply put, an elk wallow is a wet muddy spot that bull elk visit and utilize to coat themselves in mud and their own urine. Essentially, they are trying to make themselves into a walking advertisement to attract cows that will be coming into estrus in the coming weeks. The pungent odor and caked on mud are tell-tale signs of rising testosterone levels and a signal that the rut is close. A wallow can be made in a wet meadow, a seep, a spring, a pond or, even, a stock tank. In really arid and dry environments, I’ve even seen bulls use their antlers to rake and dig out an area in the dirt, urinate in it and proceed to roll around and coat themselves as much as possible.

“The pungent odor and caked on mud are tell-tale signs of rising testosterone levels and a signal that the rut is close.”

Research and experience suggest that bulls begin wallowing a couple of weeks prior to most cows coming into estrus and they will continue to wallow throughout the rut. As the rut winds down, wallowing decreases until, eventually, it dies out pretty much all together. What that means in practical terms is that bulls begin to strip their velvet in mid-August, cows come into estrus typically around the middle of September and prime time for hunting a wallow is approximately the last week of August into the first two weeks of September. 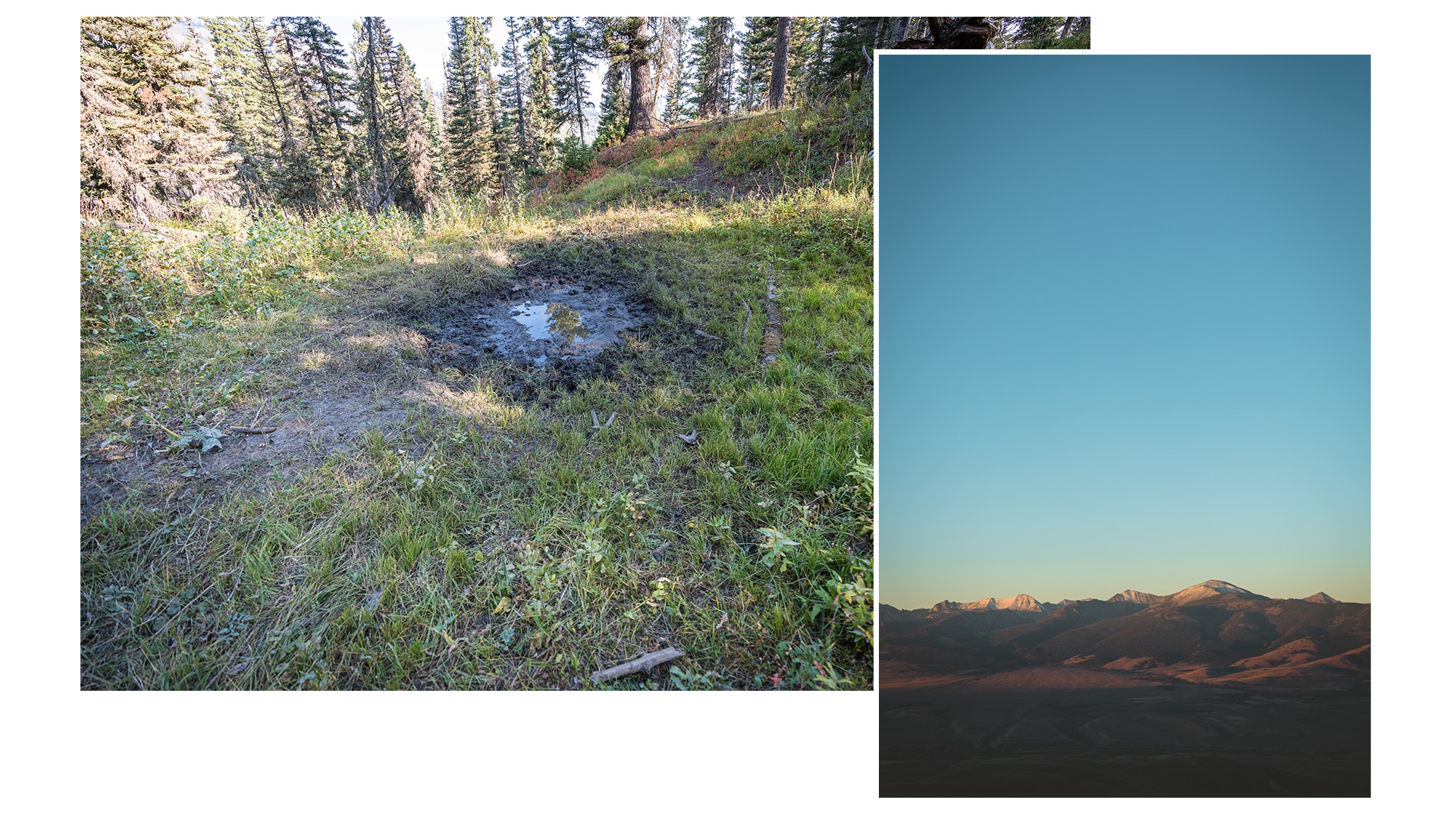 How to Find a Wallow

Without a doubt, e-scouting using 3D web maps is a great way to start scouting for well-established wallow sites because they are often visible from an aerial image. First and foremost, I start scanning for areas that look like they meet the criteria for quality elk habitat. Think about north-facing timbered slopes adjacent to feeding areas with a nice mosaic of edge habitat: food, water, cover—repeat.

Once I have areas that look appealing, I begin cruising the bottom of the drainages looking for areas that have green wet meadows and seeps that may bleed into the mainstream. Green vegetation and small open water can be often easily picked out and, pretty quickly, you’ll start to find those spots. Small, flat wet benches and tucked away pockets of water on timbered slopes are particularly appealing.

“Green vegetation and small open water can be often easily picked out and, pretty quickly, you’ll start to find those spots.”

When you find them, mark them on your mapping app and, if possible, visit those spots prior to your hunt. When visiting those spots, look for other signs that will give you more clues to the quality of that wallow. Think about the amount and size of rubs, trails and other elk sign. A trail camera on a wallow can tell you a lot about the frequency, timing and how many bulls may be using it. Another great way to find a wallow is simply to follow a herd. A bugling bull pushing cows will often make an early morning or evening stop at a wallow to freshen up. I have often followed a bugling bull to a wallow I did not know existed and later hunted that wallow with great success. 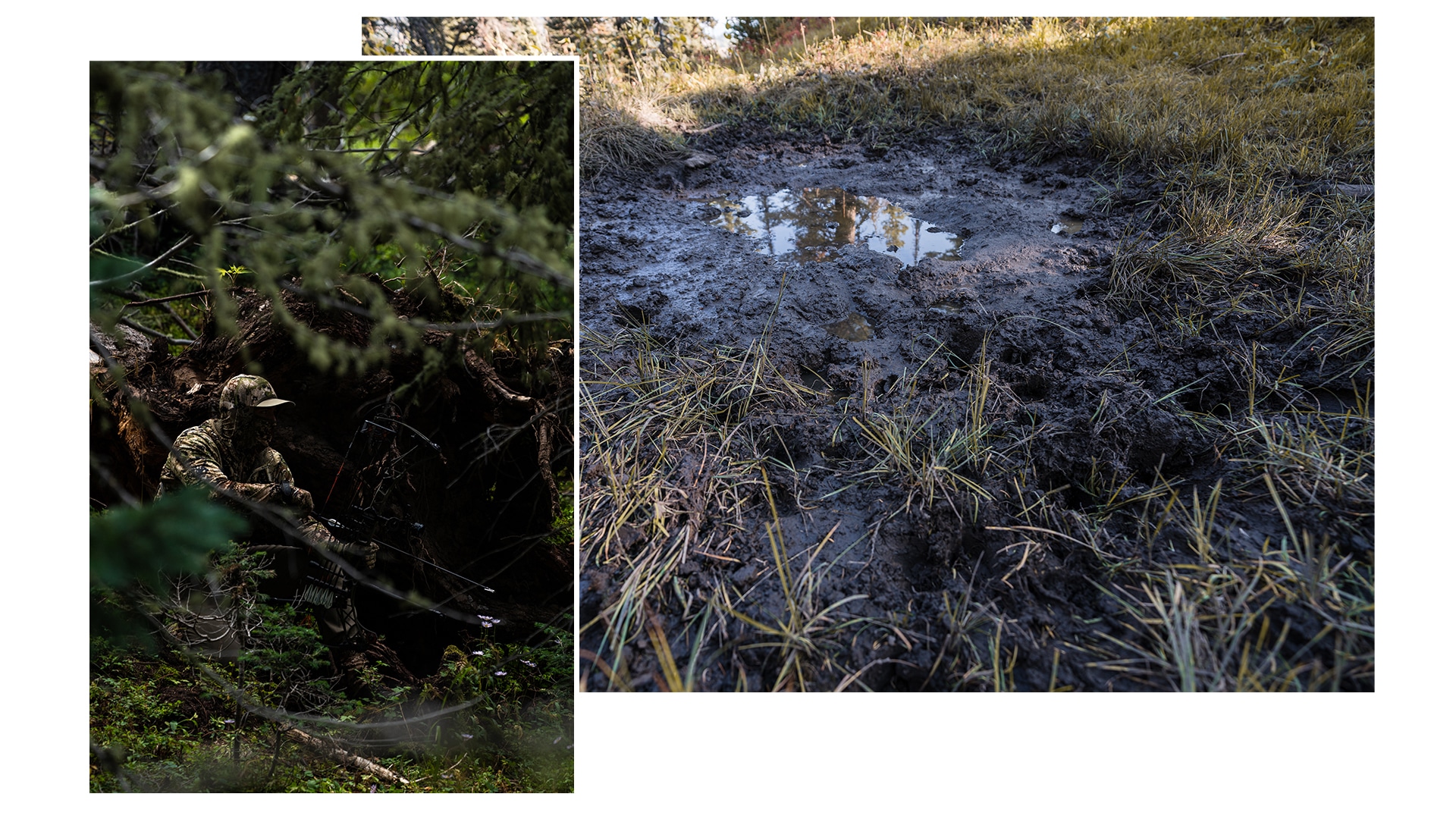 I remember a phone call I took a couple of years ago from a Midwesterner who had been traveling to Wyoming to scout and hunt general season elk for a number of years. He opened the conversation by saying, “I have a problem. I get trail camera pictures of really big bulls from July to about the first week of September and then they are gone, and I can’t seem to find them again.” I asked, “So when are you trying to hunt them?” He responded by saying that of course, he’s hunting the best dates—Sept. 14 to the end of the month.

I laughed a little and said, “Well, why are you using trail cameras to scout and see big bulls, but then, hunting ten days later than when they stop appearing on your cameras?”

“I want to hunt the rut,” he blurted out.

I understand his desire, but I also have to ask whether you want to hunt the rut or if you’d rather kill one of the big bulls that you saw during scouting or saw via trail camera. The reality is that the tail end of August and the first week of September is a critical time frame for hunting and harvesting a bull. During that time frame, bulls will often be relatively close to where they have spent their summer months feeding; however, at any minute, they can up and leave not to return until after the rut or the summer months. A well-established wallow in that home zone can be a great place to set up and kill a bull that you have scouted during the early season. Even after the rut has kicked in and bulls are attending cows, they will continue to wallow; however, by that point, it could be many miles from where they spent the summer. 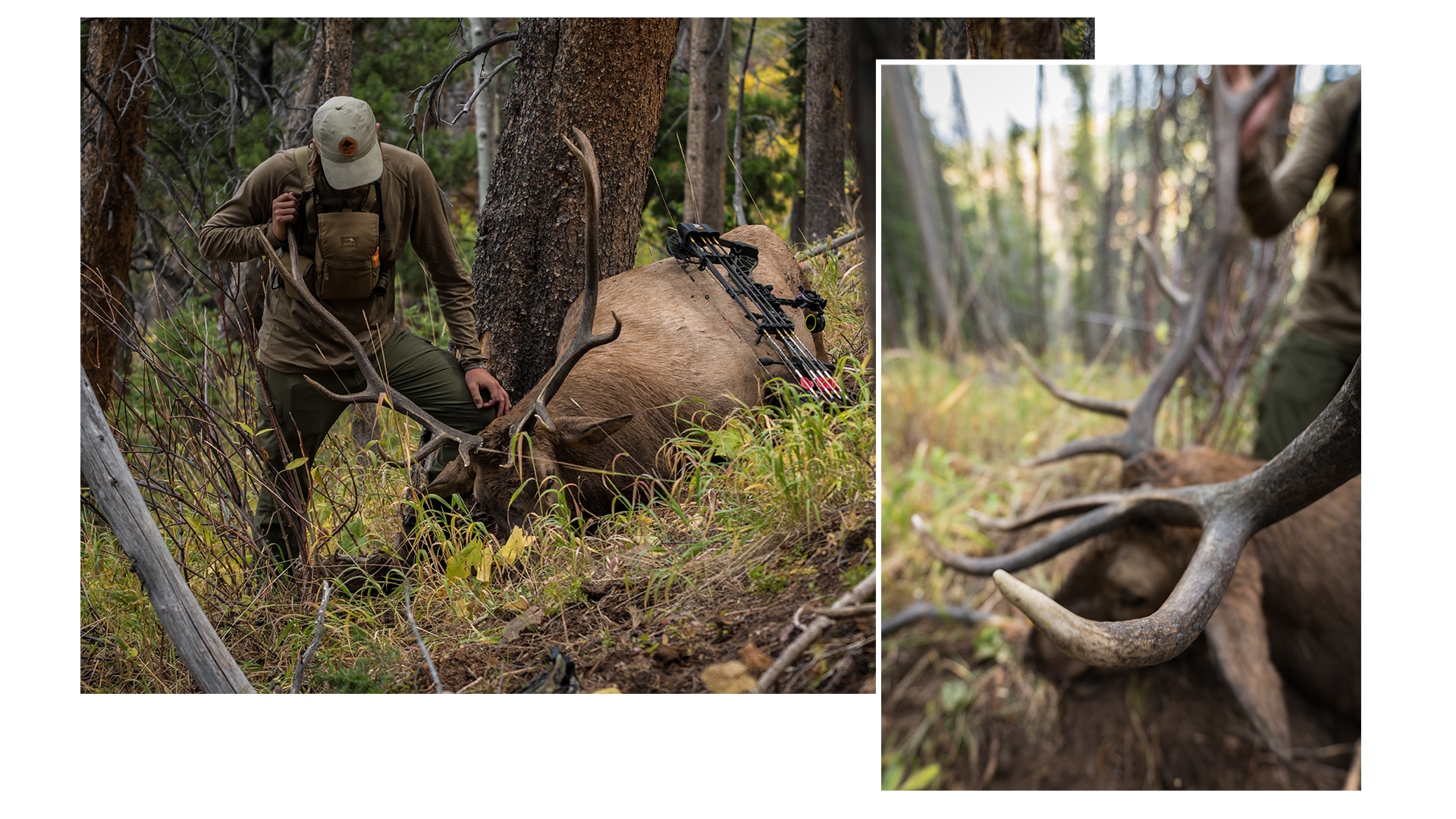 How to Beat the Crowds by Hunting Early in the Season

This means that timing is critical and hunting a wallow early can be a great time to harvest a bull. Speaking of timing, most activity is within a few hours after light or a few hours before dark. A bull might wallow mid-day if it’s in close proximity to a heavily timbered bedding area, but, for the most part, the best times of day are morning and evening to ambush a bull at a wallow.

The wind is also key, so establishing the most likely approach the bull is going to take is a critical detail. Look for trails to and from the wallow and think about the direction the wind is blowing. A bull is going to approach that wallow with the wind in his face if he can. With that to consider, try to place yourself in a spot where the wind is not blowing across you to him before he even gets there. You may have to set up below, above or to the side of a wallow and the bulls likely approach to ensure that he does not wind you.

One of the biggest benefits of hunting a wallow is that it puts you in control. You get to pick the location you want to set up in and you know the yardage to your intended target. How close or far away should you set up? First, consider your ethical shot distance. Can you hit a softball-sized circle at 40 yards every single time, arrow after arrow? Personally, I think 40 yards is better than 20 yards because you can get away with more movement and scent. If you have plenty of cover and clear shooting lanes, the closer is better. Get as close as you can to make an ethical shot, but stay far enough away that you can reduce the likelihood of getting busted while drawing.

“Personally, I think 40 yards is better than 20 yards because you can get away with more movement and scent. If you have plenty of cover and clear shooting lanes, the closer is better.”

Concealment is important when setting up on a wallow. Cover gives you the ability to draw your bow and execute a shot. There are a few methods to find cover or concealment. One is to put in a treestand. A treestand is a great way to hunt over a wallow. Getting up off the ground puts your scent up higher and away from an approaching bull. It also offers good cover. Elk are a lot less accustomed than whitetail deer to spotting an awaiting hunter in a tree. The only real issue with a treestand is that they are heavy, bulky and, in many cases, would require a lengthy pack in.

Ground blinds are another great option. A pop-up blind will work, but, again, they are heavy, bulky and tough to pack in. A natural ground blind is my favorite option. It’s one reason why I like to pack a small saw like the Outdoor Edge Grizz Saw. I can use it to cut shooting lanes or limbs and branches to create a natural blind. You can also use the available natural cover.

One of the best blinds I ever had was about 40 yards above a wallow in a patch of regenerating aspen. I was able to weave some together and cut others to create shooting lanes. About an hour before dark, I had a great 7×6 walk in and I watched him wallow for a few minutes before I was able to arrow him as he stood broadside at 40 yards.

Ambush hunting on a wallow may not be the most glamorous means of harvesting a bull, but it’s very effective, especially during the pre-rut and rut. It’s one more method to consider and you can’t eat glamour anyway!

Check out the film below where myself and Chris Neville both took archery bulls in Wyoming from a wallow.

Don’t forget to check these key areas when shed hunting this spring.

Check out our one-stop shopping guide for the holidays.

The Ultimate Guide to Bow Stabilizers