As a resident of Montana, I never thought I’d pass up opening archery elk weekend. I was relentless, borderline obsessed with the first days of elk season throughout my early 20s.  September 19 still stands the earliest date I’ve tagged out on elk. As I entered my 30s, I finally could understand the value in not tagging out sooner. By not doing so, I was gifted with additional time to learn behaviors and habits of elk.

I don’t hunt opening weekend in Montana anymore. I also don’t wish any passionate elk hunter to kill out the first days of our six-week season.

However, I understand the value in getting your tag filled, placing meat in the freezer, and spending time with others attempting to fill their tags. This perspective is also completely valid.

Once the season does begin, I focus on the behaviors and habits of hunters in the field. I’m looking for particular habits of how, when, and where they hunt an area of public land.  Sometimes there’s a pattern and sometimes there isn’t, but I do lean hard on the fact that some of the heaviest pressure I compete with is on opening weekend. At this point in my life, it isn’t worth the potential frustration to engage in opening weekend hunts.

In 2019, the year of the VXR, my September was occupied with trout guide work early in the month, followed by a photo assignment and a family wedding back home in the Midwest. I also drew a coveted muzzleloader tag for mule deer in Utah in the Western Expo.  My first days in the elk woods started on October 1. I was chomping at the bit by then. Between buddies killing some bulls, stories of close calls with herd bulls, and weekly rut updates, I was antsy to say the least, feeling like I missed Montana’s September completely.  With that said, I’ve killed more bulls late in the season compared to early season due to years of trial and error, unrelenting stubbornness, and love-sick bulls that made some risky moves late in the rut. Regardless, 2019 would turn out to be my favorite elk season grind of my life.

I had a four-day window to hunt solo October 1 to October 4 between a snowstorm and a lull in the rut. It wasn’t that classic heavy rut activity I was hoping for. No kill. I returned home to turn around with my good friend, Cal Arnold, currently recovering from a near-fatal plane crash, to rip out for another quick four-day midweek hunt. The rut activity had picked up with slightly warmer temps and a sunny, high-pressure system. Regardless of our best efforts, no-kill. 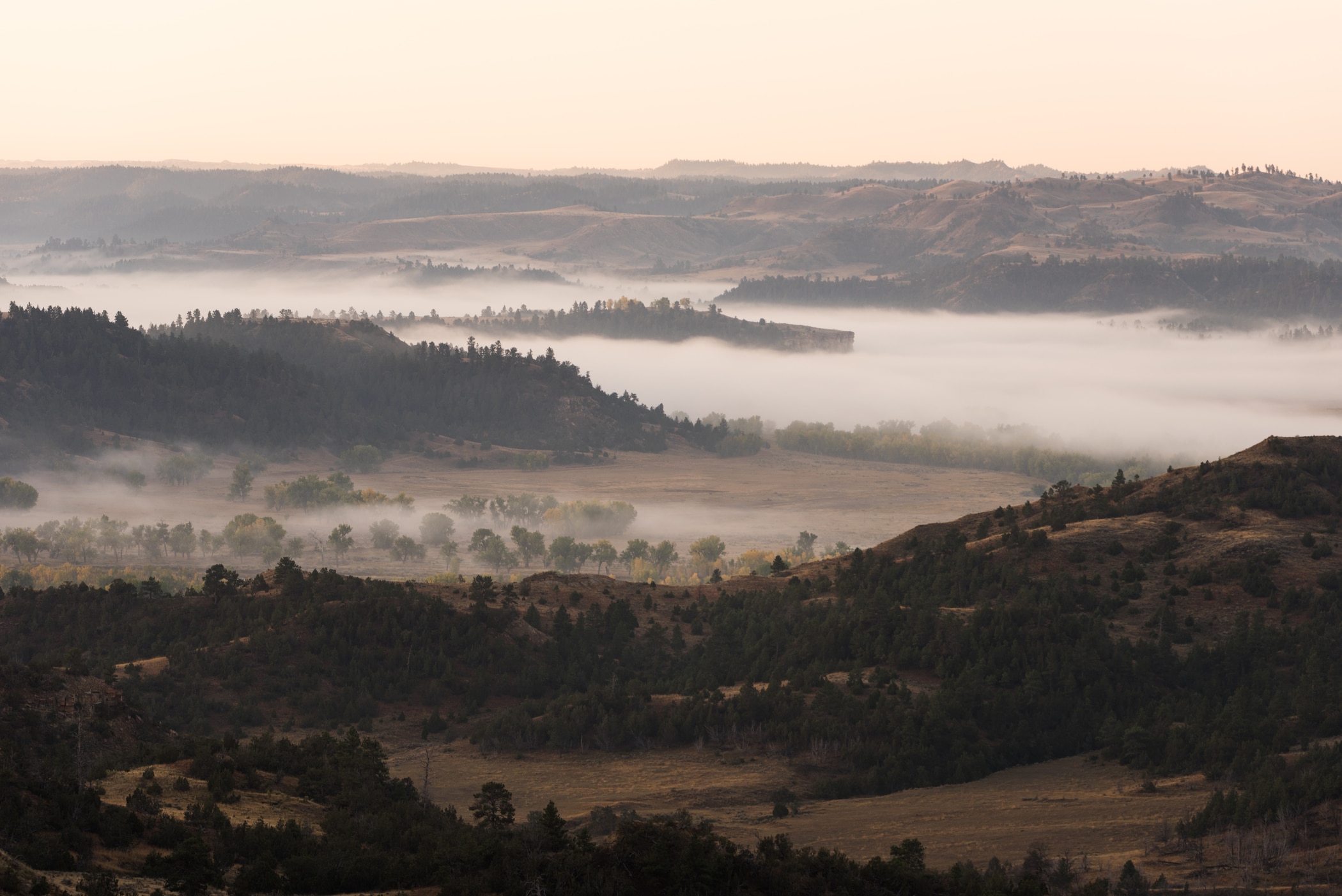 By the time I got home from our hunt together it was October 9. The rut was fading very quickly. The biggest bulls I had seen in eight days were in the process of pulling off their harems to recover in dark timber, and I was entering a timeframe of the season to which I had not been in a long time.  My wife knows me well, so when Cal and I returned empty-handed, she knew I was coming home to drop him off and turn right around.

At this point, it was October 10. I had seven days of season left before it was orange vests and Montana’s version of WWIII.  I was still hearing bugles at this point in the season. The herd bulls had pulled off to recuperate and the satellite bulls had made their way back into the large harems of cows.  I got lucky early in the morning around 4 a.m. I was driving, listening to bugles, when I caught two great big bulls crossing the road in my headlights. Amen, hallelujah!  Both of these bulls were the kind of bulls that two weeks ago would have killed each other over a yearling cow calf; but, at this point, had found comfort in each other’s age, class, and mindset in the wake of a month-long rut.  I slowed as they passed through my lights but never stopped the truck. Peeling down to the closest legal access, I grabbed a ready daypack.  I found these two bulls an hour into sunrise, barely into inaccessible private land, and grazing as hard as I’ve ever seen elk graze.  They bedded at 10 a.m. That was the beginning of a seven-day hunt: waiting, watching, learning those two bulls’ habits, while flirting so close to public it simply wasn’t an option to leave them to find something else.

There’s a saying trout guides come to know as truth: “Never leave rising trout to find rising trout.” In the case of a post-rut bachelor set of herd bulls, the same statement applies. 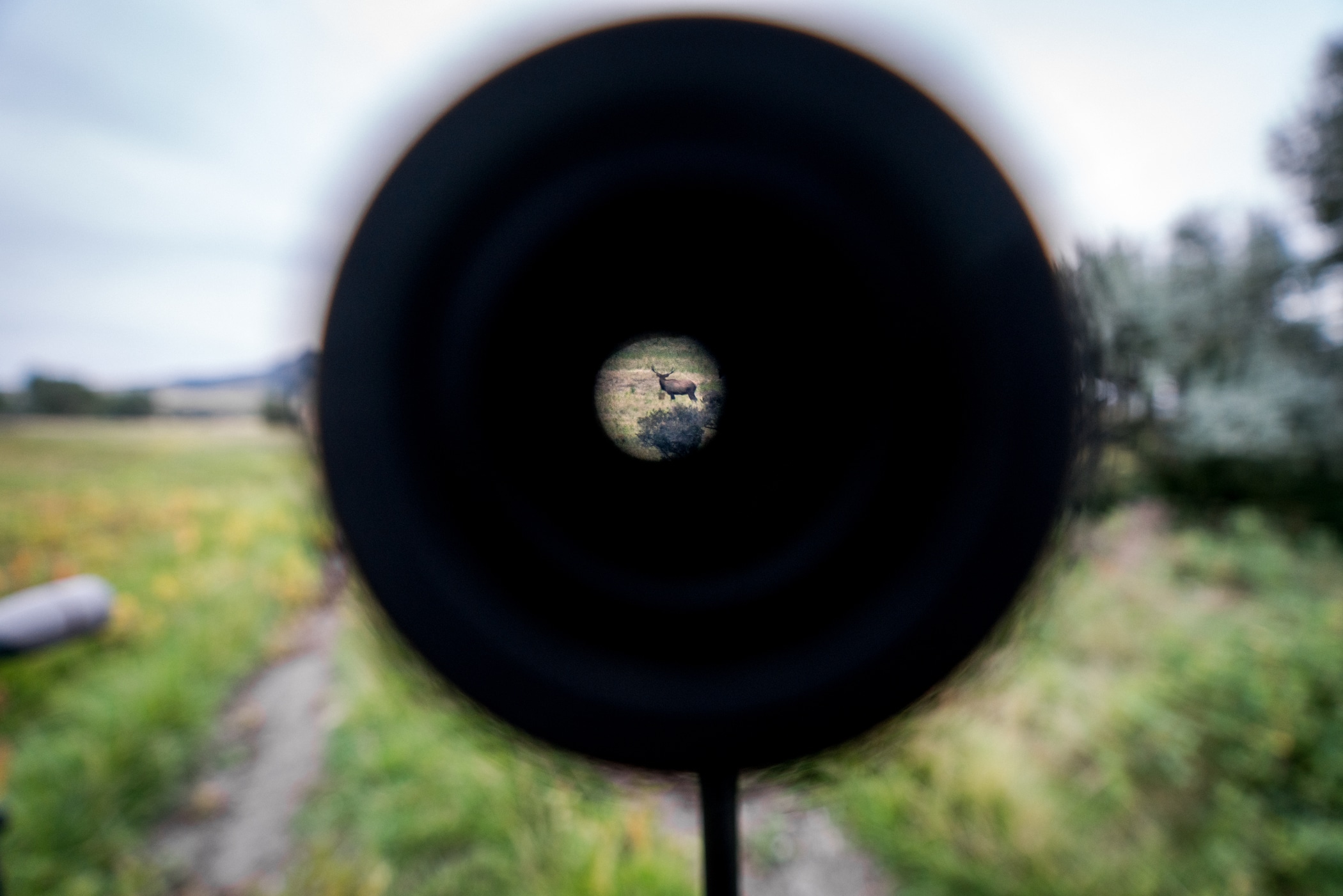 Day in, day out, I watched this pair of bulls feed up the draw. They would angle uphill into the thermals, always in the direction of the predominant wind, and then bed and repeat the process each day.  This went on for six days. Never once did they bugle, and never once did they split more than 40 yards from each other. Habits and tendencies between the two bulls started to show themselves.

On the evening of the sixth day, it was looking grim for my elk season. These bulls were so close to huntable and very predictable at this point, but I still could not make moves where they lived.  The weather forecast was calling for a 180 degree change in predominant wind direction for the first time all week with a heavy cold front coming in 48 hours. I had to stick it out to see if these two bulls would drift a couple hundred yards off their habitual lines and use thermals to climb in the morning but drift with the prevailing wind.  If it worked out, I’d have plenty of room to make one play on the last day of the season.  Before sunrise on the last day of the season, I was perched in my glassing spot and, even in the faintest light,  I could make out my two bulls headed directly under me as they casually grazed. These boys were relaxed.   By 9:30 a.m., they were 200 yards below me and looking for a bed to make.

I was so excited that I left.  I could not decide what to do and the thermals still had hours to make up their minds. Hoping to find a solid location from which to glass without the fear of them winding me, I packed up my gear and made a plan to leave the perch to make a loop around.  I know in my heart this hunt would have been over if I had not taken this course of action. No doubt.

Thermals are a touchy aspect to mountain hunting.  At 10 a.m., you may assume you have a dominant wind, but cracks and crevices that hold cold, dense air seem to always pop up in blown opportunities. These regrettable moments seem to haunt an avid hunter for years. Hoping to prevent this regret, I knew trying this stalk around 1 p.m. was wiser.

I made my quarter-mile loop but never did get glass on the bulls, which made me leery about their exact location but confident in their habits and demeanor. At this point, I had been watching for six days and was confident they were on the same face and were just not visible.  I put my moccasins on way too early just to be cautious because I hate busting elk on any day of the season and today was not going to be that day.  I started my approach from 1500 yards out around 12:30 p.m. By 2 p.m., I was over top of what I felt was their location with a strong wind in my face.  All I saw was a main beam swing out from a juniper, pause, and swing back.  I caught it around 2:30 p.m., and made moves to work my way down on them as long as the wind was perfect.  This is where I paid extremely close attention to my surroundings for bedded mule deer, edgy cottontail rabbits, etc. I did not want to take any chances on the final leg of a stalk, so when in doubt, go slower.  It took an hour and a half to go 175 yards. By the time I was in ear-shot of these bulls, one of them had gotten up to start grazing uphill, angling his way in my direction.  At 55 yards and feeding broadside, I had to make a decision: either take this bull down when a clean shot presents itself or pass on him in hopes of getting a kill shot at the other bull who had the features I personally love to find on a bull. No doubt, first world problems.

This closer bull was awesome. He was an old 6×7 bull looking well beyond his younger years and he was angling more in my direction.  At 40 yards, and looking like he could continue to walk over me, I made a proud decision to not be greedy. I was fortunate to have this opportunity on the last day of the 2019 season, so I drew back for the first time on a bull all year with only a couple hours left in the archery season. 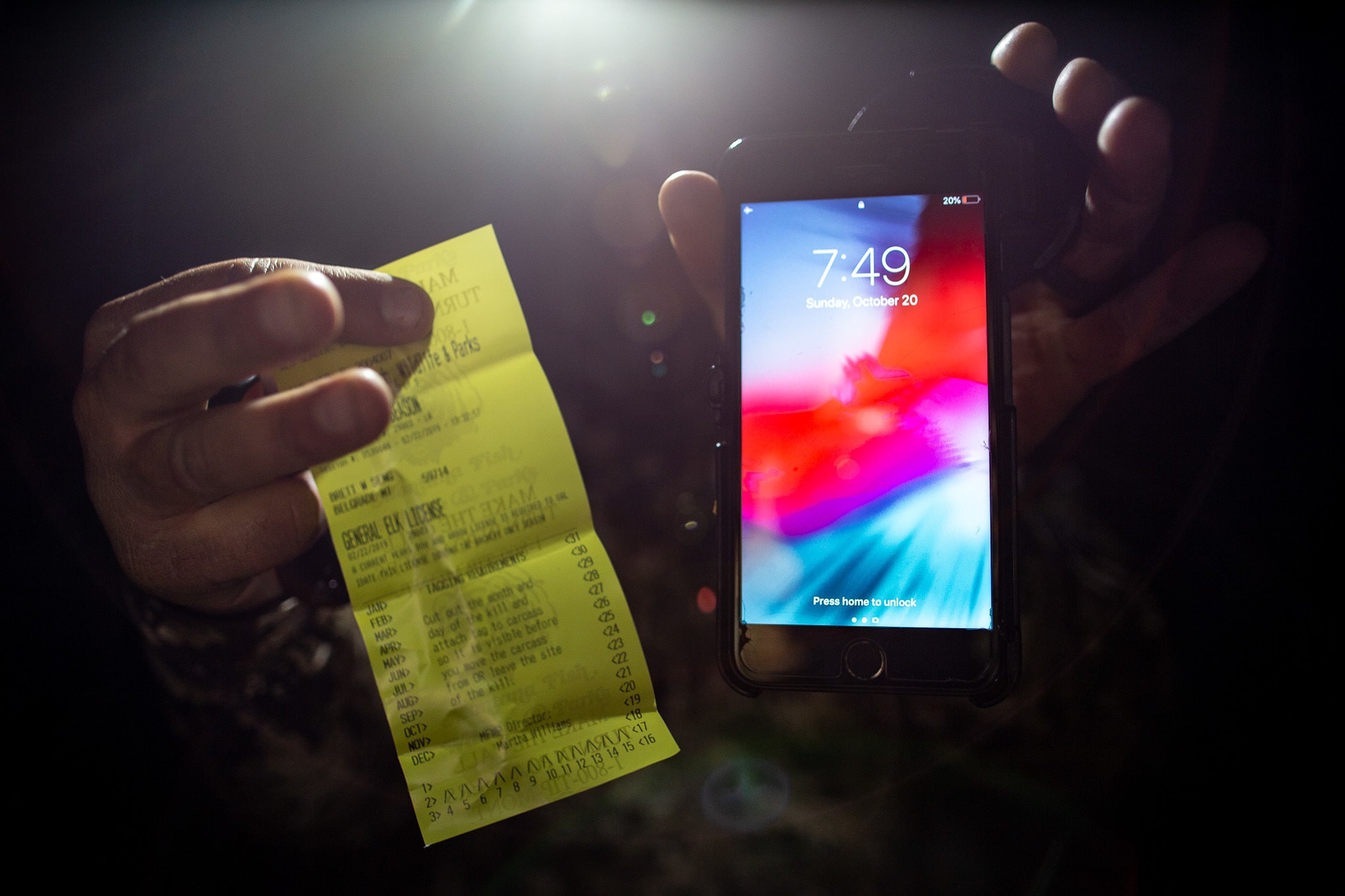 I have a tendency to hang close to the shoulder on critters. I like my options with a shoulder blade over intestines every time, but this shot I him right… on… the scapula.

515 grains, a COC fixed blade broadhead and 283 fps makes this possible to swallow. My shot was buried in the offside shoulder blade. Moments later, I was sitting on my heels watching an epic sunset. The revelation of this hunt was as clear to me as the sunset before me: patience, persistence, and self-reliance had contributed to a successful and memorable hunt. When this revelation occurs, you cannot beat the impact it has on you as a hunter, and it occurs to all of us at some point. 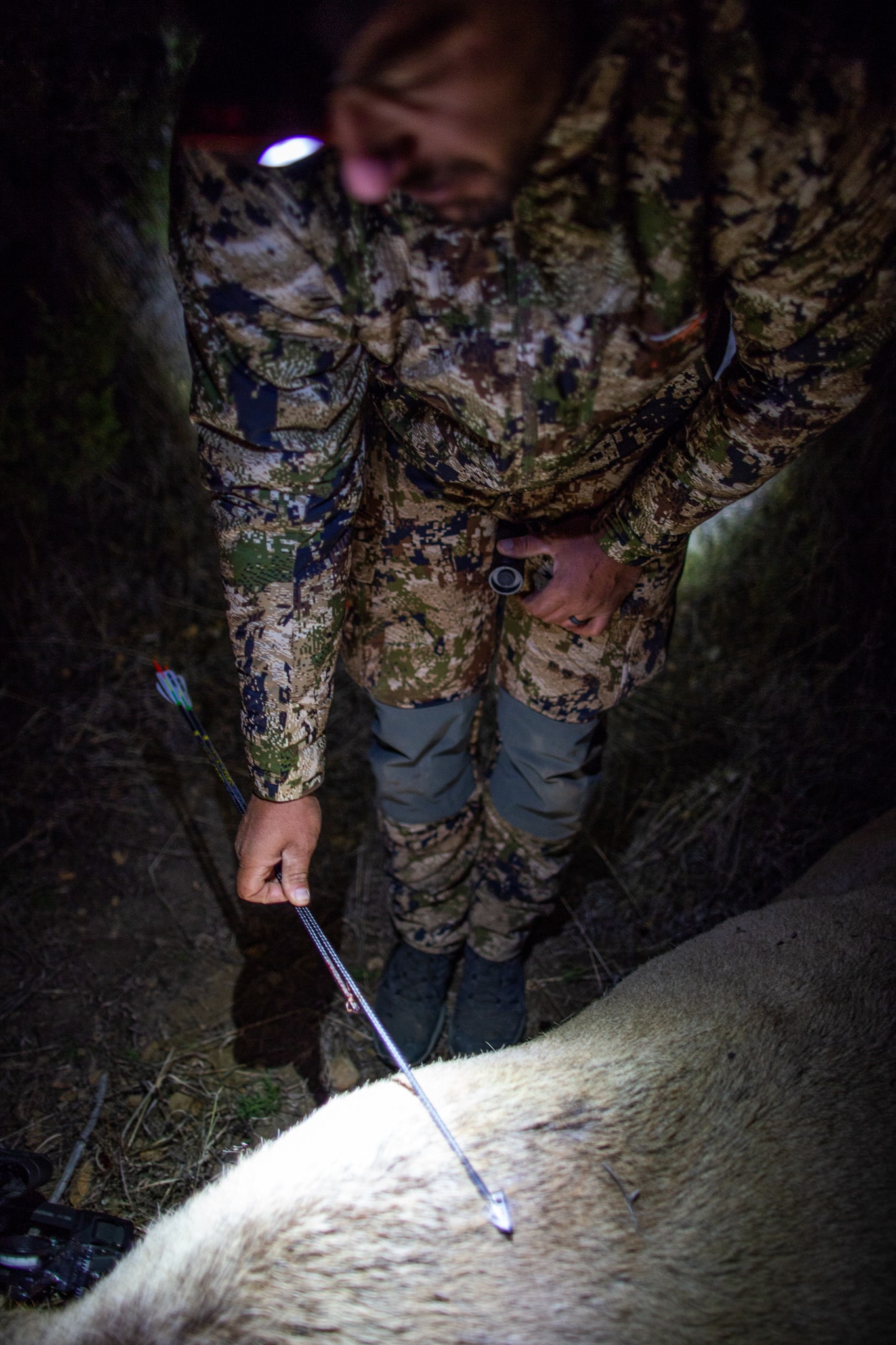 Here are a few tips to help your deer recuperate.

Don’t forget to check these key areas when shed hunting this spring.